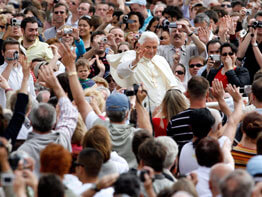 VATICAN CITY – Pope Benedict XVI said his April 15-20 visit to the United Nations and the United States was an opportunity to give – and to receive – a witness to the power of hope and faith.

Reflecting on his trip during his April 30 weekly general audience, the pope said the hope that flows from faith in Christ can vanquish even the darkness cast by the Sept. 11, 2001, terrorist attacks.

Christian hope, “stronger than sin and death, animated a moment filled with emotion, which I passed in silence in the abyss of ground zero, where I lighted a candle, praying for all the victims of that terrible tragedy,” the pope said.

The pope began his general audience by publicly thanking the U.S. Conference of Catholic Bishops and President George W. Bush for inviting him, and all those who greeted him with affection and offered prayers for the success of his visit.

Particularly when celebrating his third anniversary as pope with an April 19 Mass in St. Patrick’s Cathedral in New York, he said “it was a moving moment in which I experienced in a tangible way all of the support of the church for my ministry.”

Addressing the 20,000 people who had gathered in St. Peter’s Square for the audience, the pope said he set out on the trip “to confirm Catholics in the faith, to renew and increase brotherhood with all Christians and to proclaim to all the message of Christ our hope.”

Speaking in German without his prepared text, the pope said that everywhere he went in the United States “I was able to experience the fact that the faith is alive, that Christ is there today among the people, that he shows them the way and helps them to build the present as well as the future.”

The pope told the German speakers that God gave him an opportunity to try to strengthen the faith of others, “but at the same time, I was strengthened and came back strengthened.”

In his main audience talk, Pope Benedict said that the United States, from its founding, was built “on the foundation of a felicitous joining of religious, ethical and political principles, which still today constitutes a valid example of healthy secularity.”

The United States, he said, is a place “where the religious dimension in all its variety is not only tolerated, but is valued as the spirit of the nation and as the fundamental guarantee of human rights and responsibilities.”

Modern life and global realities continue to challenge the country, he said, and the Catholic Church has an obligation to offer its voice in order to help citizens build a society worthy of the human person and one that uses its resources to help others.

The timing of the trip, he said, was chosen to help celebrate the bicentennials of four archdioceses in the United States: New York, Boston, Philadelphia and Louisville, Ky. They were erected from the Baltimore Diocese, the nation’s first diocese, which was elevated to an archdiocese in the same year, 1808.

“The original small flock has developed enormously, enriching itself with the faith and traditions of the successive influx of immigrants. To that church which now faces the challenges of the present, I had the joy of proclaiming again Christ, our hope, yesterday, today and forever,” he said.

Praising the zeal of the bishops and priests who have led U.S. Catholics over the years and “the fervor and generosity of its faithful,” Pope Benedict said the Gospel and Christian values – particularly the value of human life and the centrality of the traditional family – must be strengthened in order to face new moral, ethical and political challenges.

As he did throughout his trip, the pope also spoke at his audience about the clergy sex abuse scandal that rocked the U.S. church.

“Thinking of the painful affair of the abuse of minors committed by ordained ministers, I wanted to express my closeness to the bishops, encouraging them in their commitment to bind up the wounds and to reinforce relations with their priests,” he said.

Pope Benedict said the “multicultural vocation” of the United States and the active presence of a wide variety of Christian communities and other religions gave him an opportunity to meet with religious leaders to promote closer cooperation among Christians and a dialogue to strengthen peace and religious values with other believers.

At the United Nations, he said, he wanted to help celebrate the 60th anniversary of the Universal Declaration of Human Rights and confirm its enduring value precisely because it is based on “the dignity of the human person, created by God in his image and likeness, in order to cooperate with him in his plan for life and for peace.”

Respect for human rights and peace can flourish only where there is justice, “an ethical order valid for all times and all peoples,” which can be summarized with Jesus’ phrase, “Do unto others as you would have them do unto you.”