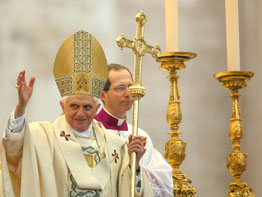 “It is true: In the solemn Easter Vigil, darkness becomes light, night gives way to the day that knows no sunset,” he said March 23, giving his Easter blessing “urbi et orbi” (to the city of Rome and the world) in St. Peter’s Square during a storm.

“We pray that joy will be present among us despite these circumstances,” he said at the end of the blessing, which capped a Mass punctuated with thunder and lightning.

“Even this darkness today is like light,” the pope said of the slate black sky.

Tens of thousands of people packed into St. Peter’s Square armed with umbrellas. Members of the Swiss Guard stood at attention despite the rain dripping off their helmets and sending red dye trickling down their backs from the helmets’ soggy red plumes.

The night before, Pope Benedict celebrated the Easter Vigil in St. Peter’s Basilica, lighting a fire and the large Easter candle in the darkened church.

During the Mass, he baptized five women and two men, including an Italian journalist who was born in Egypt to a Muslim family.

Magdi Allam, 55, attended Catholic schools in Cairo and moved to Italy as a young adult. Although he has described his published writings about Islam as a criticism of fundamentalism and terrorism, many Muslims have seen in them a misunderstanding of Islam and a criticism of the religion as a whole.

In an Easter Sunday letter published in Corriere della Sera, the Italian paper for which he writes, Allam said, “Last night I converted to the Catholic Christian religion, renouncing my previous Islamic faith.”

He said his conversion was “the healthy and mature fruit” of a long and deep reflection: “The miracle of the resurrection of Christ has reverberated in my soul, freeing it from the darkness of a preaching in which hatred and intolerance for the ‘different,’ uncritically condemned as an enemy, has primacy over love and respect for one’s neighbor.”

The Vatican did not release the names of the other six adults who joined the Catholic Church at the pope’s Easter vigil Mass, but said they came from Italy, Cameroon, China, the United States and Peru.

Regarding Allam’s conversion, Jesuit Father Federico Lombardi, Vatican spokesman, said, “For the Catholic Church every person who asks to receive baptism after a deep personal search, a fully free choice and an adequate preparation has a right to receive it.”

During his homily at the vigil, Pope Benedict said that in baptism, Jesus “comes to you and joins his life with yours, drawing you into the open fire of his love,” and, therefore, into communion with all who profess faith in him.

“Believers – the baptized – are never truly cut off from one another,” he said. “Continents, cultures, social structures or even historical distances may separate us. But when we meet, we know one another on the basis of the same Lord, the same faith, the same hope, the same love, which form us.

“Thus faith is a force for peace and reconciliation in the world,” Pope Benedict said.

After celebrating the Easter morning Mass in St. Peter’s Square, which was decorated with thousands of mostly white roses, tulips and pansies, the pope prayed for peace in the world, especially in the Holy Land, Iraq, Lebanon, Darfur, Somalia and Tibet.

“The astonishing event of the resurrection of Jesus is essentially an event of love: the Father’s love in handing over his Son for the salvation of the world; the Son’s love in abandoning himself to the Father’s will for us all; the Spirit’s love in raising Jesus from the dead in his transfigured body,” the pope said in his Easter message.

Easter, he said, is a call for all people to reject hatred and selfishness and be converted to love.

“Let no heart be closed to the omnipotence of this redeeming love,” he said.

Selfishness, injustice, hatred and violence “are the scourges of humanity, open and festering in every part of the planet,” the pope said.

“They are waiting to be tended and healed by the glorious wounds of our risen Lord and by the solidarity of people who, following in his footsteps, perform deeds of charity in his name, make an active commitment to justice” and bring hope to areas of the world “bloodied by conflict.”

Rainstorms accompanied the pope for the entire weekend, forcing him to stay under a tent March 21 during the Good Friday rite of the Way of the Cross at Rome’s Colosseum.

The meditations for the rite were written by Cardinal Joseph Zen Ze-kiun of Hong Kong and were marked by prayers for those who live their faith in the midst of persecution as well as prayers for their oppressors.

At the end of the ceremony, Pope Benedict said, “The cross is the source of immortal life, the school of justice and peace, the universal patrimony of forgiveness and mercy (and) the permanent proof of a self-giving and infinite love.”

The pope said that by becoming human, dying and rising from the dead, Jesus restored full dignity to humanity, a dignity that must be claimed, defended and promoted for all people.

The only outdoor event not marked by rain was the Easter Monday recitation of the Regina Coeli prayer at the papal villa in Castel Gandolfo, south of Rome. The pope went to the villa by helicopter after Easter Mass.