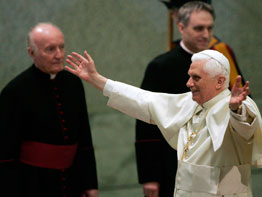 VATICAN CITY – Pope Benedict XVI said Lent was a time for Christians to live as “witnesses of charity,” demonstrating that love is a defining characteristic of their faith.

“Lent is a privileged time for all Christians to recommit themselves to conversion and spiritual renewal. In this way, we rekindle a genuine faith in Christ, a life-giving relationship with God and a more fervent dedication to the Gospel,” the pope said at his general audience Feb. 20.

“Strengthened by the conviction that love is the distinguishing mark of Christian believers, I encourage you to persevere in bearing witness to charity in your daily lives,” he said.

The pope continued his series of audience talks on St. Augustine, citing numerous works that have influenced the life of the church and helped form Western culture.

St. Augustine’s best-known work was “Confessions,” in which he confessed his own weaknesses and praised God’s grace and mercy, the pope said.

The “Confessions” had a great impact even in St. Augustine’s day. The pope quoted the saint as acknowledging that the work had “pleased many of my brothers.”

Looking up from his text, the pope said with a smile, “And I have to say that I am one of these brothers.” The packed audience hall broke into applause.

The pope wrote his doctoral thesis on the notion of the people of God in St. Augustine, and the fifth-century theologian and bishop has influenced deeply the pope’s own writings.

In his audience talk, the pope explained that while St. Augustine was a great intellectual he dedicated much of his life to more simple pastoral works and sermons.

The saint once suspended his dictation of the great work, “De Trinitate” (On the Trinity), because he thought the writing was too difficult for all but a few people, and he wanted to spend more time on pastoral tracts, the pope said.

“So it was more useful for him to communicate the faith in a comprehensive way to everyone rather than write great theological works,” the pope said.

Rather than closing himself off from others, St. Augustine lived his life in dialogue with God and with other people, he said.

“Although Augustine is renowned for his towering intellect and vast body of writings, his primary concern was always to spread the Christian message,” he said.