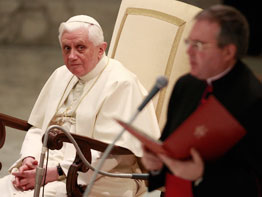 VATICAN CITY – Lent is a time to return to God’s loving embrace and to remember that true happiness can only come from being a friend of Jesus, Pope Benedict XVI said.

The Lenten journey is a time of conversion which means “letting oneself be overcome by Jesus and with him return to the Father,” the pope said during his weekly general audience Feb. 6, Ash Wednesday.

“When modern man declares his total independence from God, he becomes a slave to himself, and often he finds himself inconsolably lonely,” Pope Benedict said.

“Striving for success, yearning for prestige and the quest for comfort – when these completely absorb one’s life” to the point of neglecting God, happiness does not ensue, said the pope.

He said experience has shown that having one’s expectations and needs fulfilled is not what brings contentment.

“In reality, the only joy that makes the human heart overflow is that which comes from God” because humanity thirsts for a joy that is infinite and resistant to being quashed by daily worries, he said.

“The invitation to conversion then is an incentive to return to the embrace of God – a warm and merciful Father, to trust in him and put oneself in his hands like adopted children rejuvenated by his love,” said the pope.

Leading a busy life, battling worries and trying to fulfill daily commitments can make people “forget how extraordinary an adventure it is that Jesus has involved us in,” he said.

Being a disciple of Christ is never a completed achievement that is “over and done with,” he said. Being Christian is a process that requires constant and continual renewal as well as taking spiritual, restorative breaks, he said.

Pope Benedict told about 5,000 people in the Paul VI audience hall that in his message for Lent, released Jan. 29, he wanted to remind Christians that they are called to “not idolize earthly goods, but to use them as a means for living and helping those in need.”

The Lenten journey entails prayer, reflection, penance, sacrifice and works of charity, he said. By promoting almsgiving, he said the church teaches its flock to be on the lookout for those in need and imitate Christ who made himself poor so others might become rich.

In remarks made in English after his main audience address, the pope acknowledged the presence of a delegation of government leaders from Iraq, Lebanon and Jordan. He said he hoped their efforts would foster “reconciliation, justice and peace in the region.”

One of the many pilgrims the pope met with at the end of the audience was Ugandan author China Keitetsi. She gave Pope Benedict the sequel to her best-seller, “Child Soldier: Fighting for My Life.”

The new book, currently published only in German, is titled “Tears Between Heaven and Earth: My Way Back to Life.” Keitetsi was recruited at the age of 8 to fight as a child soldier.

She also brought with her for the pope’s blessing a heavy metal cross fashioned out of what had been a machine gun.