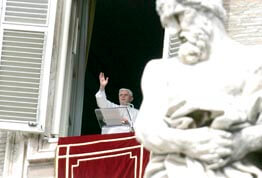 Destroying human embryos for harvesting stem cells or any other purpose “contradicts the purported intent of researchers, legislators and public health officials to promote human welfare,” he said in an address to South Korea’s new ambassador to the Vatican.

While advances in biotechnology have the potential to treat and cure otherwise deadly or debilitating illnesses, such discoveries “invite man to a deeper awareness of the weighty responsibilities involved in their application,” the pope told Francesco Kim Ji-Young, who presented his letters of credential in an Oct. 11 ceremony at the Vatican.

“Foremost among these is the dignity of human life, for under no circumstances may a human being be manipulated or treated as a mere instrument for experimentation,” he said.

South Korea made the headlines in 2004, when Hwang Woo-suk, a scientist from Seoul National University, claimed he had created the world’s first cloned human embryos. That and a later claim he had cloned patient-specific stem cells were found to be false.

The scientist was discredited for using fake research and phony data and faced charges of fraud, embezzlement and breaking the country’s bioethics laws.

In his speech to the new ambassador, the pope praised South Korea’s “rejection of human cloning and related procedures” and said he hoped that such display of “moral sensibility” would help prompt the rest of the world to become aware of “the deep ethical and social implications of scientific research and its utilization.”

While the church opposes any cloning or stem-cell research that results in the killing of a human embryo, it supports and encourages adult stem-cell research, which not only respects all stages of human life, but has produced favorable results, the pope said.

The pope also commended South Korea’s efforts to bring peace to the Korean peninsula and foster “fruitful and open dialogue while simultaneously working to alleviate the pain of those suffering from the wounds of division and distrust.”

North and South Korea signed a historic joint declaration Oct. 4 calling for international talks to bring about a permanent peace deal that would replace the 1953 armistice and would bring a formal end to the Korean War.

The day before, North Korea agreed to end its nuclear ambitions after a series of six-nation disarmament talks.

The pope told the South Korean ambassador it was his “ardent hope” that continued multilateral talks would “lead to a cessation of programs designed to develop and produce weapons with frightening potential for unspeakable destruction.”