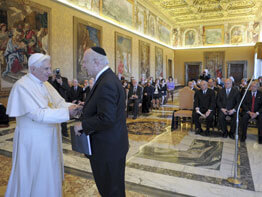 “This terrible chapter in our history must never be forgotten,” the pope said during a Feb. 12 meeting at the Vatican with members of the Conference of Presidents of Major American Jewish Organizations.

The papal audience came less than three weeks after the Vatican announced the pope had lifted the excommunication of several traditionalist bishops, including Bishop Richard Williamson, who has said reports about the Nazi slaughter of the Jews have been exaggerated and who claimed no Jews died in Nazi gas chambers.

The Vatican later published a statement saying that Bishop Williamson would not be welcomed into full communion with the church unless he disavowed his remarks and publicly apologized.

While the pope publicly reaffirmed his recognition of the Holocaust and expressed his respect and esteem for the Jewish people in late January, the February audience was the first time since the Bishop Williamson scandal that the pope met with Jewish leaders to express his feelings and beliefs personally.

Telling the Jewish leaders he wanted to make his own a prayer by Pope John Paul II, Pope Benedict prayed, “God of our fathers, you chose Abraham and his descendants to bring your name to the nations: We are deeply saddened by the behavior of those who in the course of history have caused these children of yours to suffer and, asking your forgiveness, we wish to commit ourselves to genuine brotherhood with the people of the Covenant.”

The prayer was the text of the note Pope John Paul left in Jerusalem’s Western Wall, one of Judaism’s most holy sites, during a March 2000 visit.

Pope Benedict also told the Jewish leaders about his own visit to the Nazi’s Auschwitz death camp in 2006.

“As I walked through the entrance to that place of horror, the scene of such untold suffering, I meditated on the countless number of prisoners, so many of them Jews, who had trodden that same path into captivity at Auschwitz and in all the other prison camps,” the pope said.

“How can we begin to grasp the enormity of what took place in those infamous prisons?” he asked.

The pope told the leaders, “The hatred and contempt for men, women and children that was manifested in the Shoah was a crime against God and against humanity.

“This should be clear to everyone,” the pope said.

“It is beyond question that any denial or minimization of this terrible crime is intolerable and altogether unacceptable,” Pope Benedict said.

The German-born pope repeated what he had said during his visit to Auschwitz, “The rulers of the Third Reich wanted to crush the entire Jewish people, to cancel it from the register of the peoples of the earth. Thus the words of the psalm, ‘We are being killed, accounted as sheep for the slaughter,’ were fulfilled in a terrifying way.”

The pope also told the Jewish leaders that the Catholic Church “is profoundly and irrevocably committed to reject all anti-Semitism” and to build good and lasting relations with the Jewish community.

Reaffirming the importance of remembering the Holocaust, the pope said, “it is my fervent prayer that the memory of this appalling crime will strengthen our determination to heal the wounds that for too long have sullied relations between Christians and Jews.”

The 78-year-old Austrian-born rabbi told the pope, “As a Holocaust survivor these have been painful and difficult days when confronted with Holocaust denial by no less than a bishop.”

“The Shoah claimed the lives of 6 million Jewish men, women and children, including my own family in Auschwitz and Terezin,” a camp in what is now the Czech Republic, he told the pope.

Addressing the 81-year-old pope, he said, “Your Holiness, we and so many others, who have seen man’s inhumanity to man, how can we but revolt at Holocaust denial?”

“In our autumn years,” he told the pope, “we must transmit ‘never again’ through Holocaust education to future generations.”