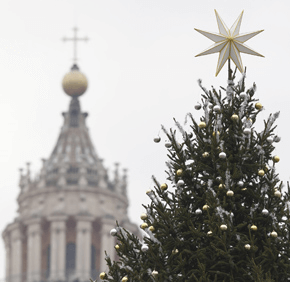 By Cindy Wooden
Catholic News Service
VATICAN CITY – If silence is not one of the sounds associated with Christmas preparations, chances are people will miss an experience of the love and tenderness that is at the heart of the holiday, Pope Francis said.
Celebrating Mass Dec. 12 in the chapel of his residence, Pope Francis offered a reflection on the tone of voice and the endearments God uses to speak to people and communicate his love.
It’s not so much what God says as how he says it, the pope said in his homily.
“When a child has a bad dream and wakes up crying,” he said, “Dad goes and says, ‘Don’t be afraid, don’t be scared. I’m here.’
“The Lord speaks this way, too,” he said, pointing to the day’s reading from Isaiah 41, in which the Lord reassures Jacob, affectionately calling him a little worm.
“When we watch a dad or mom talking to a child, we see how they become small, using the voice of a child and the gestures of a child,” he said. “From the outside one can think, ‘Oh, how ridiculous.’ They make themselves smaller, don’t they? That’s because a father’s or mother’s love needs to be close. I’d say this: They need to crouch down to enter the world of the child.”
Pope Francis said it is obvious that parents don’t have to talk baby talk to their children to be understood, but sometimes it helps if they “make themselves children. The Lord is like that, too.
“And so, the father and the mother say ridiculous things to the child, like, ‘Ah, my love, my toy,’“ the pope said. “The Lord says these things, too: ‘You worm, Jacob,’ ‘You are like a worm to me, a tiny little thing, but I love you so much.’“
The language of the Lord is the language of love and tenderness, of whispers and extreme simplicity, he said.
When the Lord spoke to Elijah, the pope said, it was not in the roar of the wind or the rumble of an earthquake, but in “the sound of that silence that is proper to love” and “doesn’t make a spectacle.”
“This is the music of the Lord’s language and, as we prepare for Christmas, we must listen for it. It will do us good to hear it,” Pope Francis said.
“Usually, Christmas seems like a very noisy feast,” he said, but “we can use a bit of silence to hear these words of love, closeness and tenderness.”
PrevNext