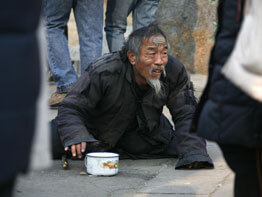 VATICAN CITY – Fasting from food and detaching oneself from material goods during Lent help believers open their hearts to God and open their hands to the poor, Pope Benedict XVI said.

The Lenten fast helps Christians “mortify our egoism and open our hearts to love of God and neighbor,” said the pope in his message for Lent 2009.

The papal message for Lent, which begins Feb. 25 for Latin-rite Catholics, was released Feb. 3 at the Vatican.

Cardinal Paul Cordes, president of the Pontifical Council Cor Unum, the Vatican’s office for promoting and coordinating charity, told reporters that Christian fasting brings together love for God and love for neighbor.

“The pope reminds us of our obligation to open our hearts and our hands to those in need,” he said at the Vatican presentation of the message.

“Serving the hungry is a moral call that unites people of all faiths,” said Ms. Sheeran, whose organization relies heavily on Catholic charities and other faith-based organizations to distribute food aid.

“At this time of worldwide economic challenges, let us not forget that the food and financial crises hit the world’s most vulnerable the hardest,” she said. “Since 2007, 115 million were added to the ranks of the hungry to create a total of nearly 1 billion people without adequate food.”

Ms. Sheeran said that at a time when the U.S. and other governments are announcing multitrillion-dollar packages to bailout banks, car companies and other industries, the World Food Program is asking that 0.7 percent of all stimulus plans be dedicated to hunger relief.

“Financial rescue packages must serve not only Wall Street and Main Street, but also the places with no streets,” she said.

Cardinal Cordes and Ms. Sheeran agreed that the financial bailout plans are necessary not just for helping the world’s richest nations, but also for preventing a worsening situation in poor countries dependent on exports, on development aid and on the money their citizens working abroad send home to support their families.

“If the financial system fails completely, it will hurt the poor first,” Cardinal Cordes said.

Ms. Sheeran said the 2007-2008 food crisis – when the price of basic staples soared – combined with more recent job losses because of the financial crisis involved “two separate problems, but the result is the same: malnutrition and death.”

In his message, Pope Benedict said the Lenten practices of prayer, fasting and almsgiving are meant to help Christians focus on God and prepare for the Easter celebration of Jesus’ victory over sin and death.

Focusing his message specifically on the practice of fasting, the pope said it is a way for believers to submit themselves “humbly to God, trusting in his goodness and mercy.”

“Denying material food, which nourishes our body, nurtures an interior disposition to listen to Christ and be fed by his saving word,” the pope wrote.

“Through fasting and prayer we allow him to come and satisfy the deepest hunger that we experience in the depths of our being: the hunger and thirst for God,” he said.

While some people fast to cleanse their body or to lose weight, Christians fast during Lent in order “to heal all that prevents them from conformity to the will of God,” he said.

“Freely chosen detachment from the pleasure of food and other material goods helps the disciple of Christ to control the appetites of nature, weakened by original sin,” the pope wrote.

At the same time, he said, “fasting is an aid to open our eyes to the situation in which so many of our brothers and sisters live.”

By fasting in solidarity with the poor, “freely embracing an act of self-denial for the sake of another, we make a statement that our brother or sister in need is not a stranger,” the pope said.