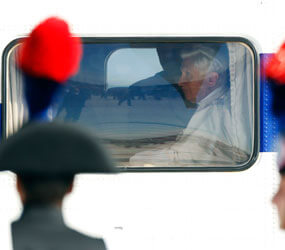 ABOARD THE PAPAL FLIGHT TO CYPRUS – Pope Benedict XVI said he was deeply saddened by the murder of the president of the Turkish bishops’ conference, but he said Bishop Luigi Padovese’s death should not cast a shadow over his visit to the eastern Mediterranean or over Catholic-Muslim dialogue.

“Right now we have little information, but it is certain that it was not a political or religious assassination; it was personal,” the pope said.

Bishop Padovese, the apostolic vicar of Anatolia, died June 3 of stab wounds. His driver and friend, who had been undergoing psychiatric treatment, was arrested and reportedly confessed to the crime.

Flying to Cyprus, an island divided between Greek Cypriots and Turkish Cypriots, the pope said, “It is a tragedy that saddens us, but it should not cast a shadow over the dialogue in every sense that will be a theme of this trip.”

The pope spent just under 15 minutes answering five questions posed to him by Jesuit Father Federico Lombardi, the Vatican spokesman. Journalists had submitted questions to Father Lombardi in writing before the trip.

Pope Benedict said that by visiting Cyprus and by presenting the working document for the special Synod of Bishops on the Middle East, he hoped to promote peace, which is “the common responsibility of all who believe in the one God, creator of heaven and earth, the God in whose image and likeness we were created.”

Obviously, certain political conditions must be met to ensure peace, he said, but political moves will not succeed unless people’s hearts are open, and that’s a task for religious leaders.

The pope was asked about the current international tension surrounding Israel’s raid on a flotilla of boats attempting to run Israel’s three-yearlong blockade of the Gaza Strip.

“There is always the danger of losing patience, of saying, ‘enough, it is no longer possible to seek peace,’” he said.

Religious leaders have an obligation to help their people trust in God and be patient, despite the difficulties facing them, he said.

“After every case of violence, we must not lose patience, we must have the courage, the magnanimity to begin again … With the certainty that we can move forward, we can achieve peace, that violence is not the solution,” he said.

The pope also said he hoped his visit to Cyprus – his first to a country with an Orthodox majority – would help Catholics and Orthodox recognize how much they have in common, including the Bible, the liturgy and a love for Mary.

During his trip, the pope planned to present the working document for the special Synod of Bishops for the Middle East, which will be held Oct. 10-24 at the Vatican.

He told reporters he hoped the synod would allow church leaders from Egypt to Iran to get to know each other, share concerns and find ways to strengthen the Christian presence in the region.

The synod also is an occasion to remind the world that “there is a large, ancient Christian community in the Middle East,” he said.

Other Christians should offer them support, he said, so that “they would not lose hope and would remain despite the difficulties.”