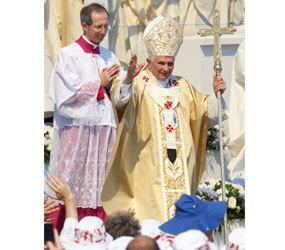 ANCONA, Italy – Remembering the Sept. 11, 2001, terrorist attacks, Pope Benedict XVI appealed to government leaders and all people of good will to work toward a future marked by solidarity and peace.

The pope marked the 10th anniversary of the terrorist attacks in the United States after celebrating the closing Mass for the Italian National Eucharistic Congress in Ancona, on Italy’s Adriatic coast.

Before leading the midday Angelus prayer with about 80,000 people gathered at a shipyard, the pope recalled the anniversary.

“In commending to the Lord the lives of the victims of the attacks carried out that day and their families, I ask leaders of nations and people of good will always to refuse violence as a solution to problems, to resist the temptation of hatred and to work in society, drawing inspiration from the principles of solidarity, justice and peace,” the pope said.

Pope Benedict also sent a message to about 300 religious leaders gathered in Munich to commemorate the anniversary at the beginning of the annual interreligious dialogue meeting sponsored by the Community of Sant’Egidio, a Rome-based lay movement.

The theme of the gathering was “Bound to Live Together,” and the pope said that when people do not open themselves to learning from, sharing with and respecting others, living together “can become a hell.”

Religious leaders, he said, must ask themselves how they can become forces to promote peaceful coexistence and cooperation.

Religions promote peace when they lead people to an encounter with God and to a life lived out of obedience and love for God and for the men and women he created, he said.

“If religion fails to bring people to God, if it lowers God to itself instead of raising us to him, if it makes God our property in some way, then religion can contribute to the dissolution of peace,” he said.

“We know that in Christianity, too, there have been distortions of the image of God, which have led to the destruction of peace. We are all called to let God purify us so that we would become people of peace,” the pope wrote.

The Sant’Egidio meeting opened with a prayer service linked by satellite with New York.

In addition, Archbishop Timothy M. Dolan of New York also sent a message to the religious leaders gathered in Munich.

“We are all entrusted with a sacred task each day, but especially today: the task of reflecting together on the future we want to build,” he wrote.

“The next 10 years of this still new century cannot be like the first,” he said. “Peace must finally reign.”

Andrea Riccardi, founder of Sant’Egidio, told the gathering, “September 11, 2001, was the tragic opening of the 21st century. We clearly saw how terrorism is the foulest form of violence.”

The terrorist attacks and the reaction to them, he said, led to a “generalized culture of conflict” in which thousands of civilians and soldiers died in Afghanistan, Iraq and Pakistan.

The task for those who believe in God and who want a future of hope and peace, he said, is to “go back to the feelings of global sympathy and compassion” that marked Sept. 11, 2001.

The outpouring of solidarity that day, he said, was not an expression of naivete, but of a “sense of a common destiny.”

At the memorial service, Cardinal Reinhard Marx of Munich said people must not let “terror set the political and social agenda.”

While nations have an obligation to act to protect their citizens, “we have been too focused on scenarios and rhetoric of war,” he said. “We have to learn again that our world can function in the future only with an order of justice and solidarity, with forces of reconciliation, peace and coexistence.”