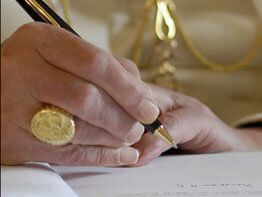 VATICAN CITY – In an encyclical on Christian hope, Pope Benedict XVI said that, without faith in God, humanity lies at the mercy of ideologies that can lead to “the greatest forms of cruelty and violations of justice.”

The pope warned that the modern age has replaced belief in eternal salvation with faith in progress and technology, which offer opportunities for good but also open up “appalling possibilities for evil.”

“Let us put it very simply: Man needs God, otherwise he remains without hope,” he said in the encyclical, “Spe Salvi” (on Christian hope), released Nov. 30.

The 76-page text explored the essential connection between faith and hope in early Christianity and addressed what it called a “crisis of Christian hope” in modern times.

It critiqued philosophical rationalism and Marxism and offered brief but powerful profiles of Christian saints – ancient and modern – who embodied hope, even in the face of suffering.

The encyclical also included a criticism of contemporary Christianity, saying it has largely limited its attention to individual salvation instead of the wider world, and thus reduced the “horizon of its hope.”

“As Christians we should never limit ourselves to asking: How can I save myself? We should also ask: What can I do in order that others may be saved?” it said.

It was the pope’s second encyclical and followed his 2006 meditation on Christian love. He worked on the text over the summer during his stay in the Italian mountains and at his villa outside Rome.

The pope said the essential aspect of Christian hope is trust in eternal salvation brought by Christ. In contrast with followers of mythology and pagan gods, early Christians had a future and could trust that their lives would not end in emptiness, he said.

Yet today the idea of “eternal life” frightens many people and strikes them as a monotonous or even unbearable existence, the pope said. It is important, he said, to understand that eternity is “not an unending succession of days in the calendar, but something more like the supreme moment of satisfaction.”

“It would be like plunging into the ocean of infinite love, a moment in which time – the before and after – no longer exists,” he said. This is how to understand the object of Christian hope, he said.

The encyclical’s main section examined how the emphasis on reason and freedom – embodied in the French revolution and the rise of communism – sought to displace Christian hope. Redemption was seen as possible through science and political programs, and religious faith was dismissed as irrelevant and relegated to a private sphere.

While praising Karl Marx for his great analytical skill, the pope said Marx made a fundamental error in forgetting that human freedom always includes “freedom for evil,” which is not neutralized by social structures.

In the same way, the pope said, those who believe man can be “redeemed” through science and technological advances are mistaken.

“Science can contribute greatly to making the world and mankind more human. Yet it can also destroy mankind and the world unless it is steered by forces that lie outside it,” he said.

The pope said that while Christians have a responsibility to work for justice, the hope of building a perfect world here and now is illusory. Hopes for this world cannot by themselves sustain one’s faith, he said.

“We need the greater and lesser hopes that keep us going day by day. But these are not enough without the great hope, which must surpass everything else. This great hope can only be God,” he said.

The second half of the encyclical discussed how Christian hope can be learned and practiced – particularly through prayer, acceptance of suffering and anticipation of divine judgment.

The pope called prayer a “school of hope,” and as an example he held out the late Vietnamese Cardinal Francois Nguyen Van Thuan, who spent 13 years in prison, nine of them in solitary confinement.

In this “situation of seemingly utter hopelessness,” the fact that he could still listen and speak to God gave him an increasing power of hope, the pope said.

He emphasized that prayer should not be isolating and should not focus on superficial objectives. Nor can people pray against others, he said.

“To pray is not to step outside history and withdraw to our own private corner of happiness,” he said.
“When we pray properly we undergo a process of inner purification which opens us up to God and thus to our fellow human beings as well,” he said.

Suffering is part of human existence, and the sufferings of the innocent appear to be increasing today, the pope said. He said Christians should do whatever they can to reduce pain and distress.

Yet suffering cannot be banished from this world, and trying to avoid anything that might involve hurt can lead to a life of emptiness, he said. Instead, Christians are called to suffer with and for others, and their capacity to do so depends on their strength of inner hope, he said.

“The saints were able to make the great journey of human existence in the way that Christ had done before them, because they were brimming with great hope,” he said.

The pope recalled that in the not-too-distant past, many Christians would “offer up” to Christ their minor daily disappointments and hardships. Perhaps that practice should be revived, he said.

The pope said the idea of judgment – specifically the Last Judgment of the living and the dead – touched strongly on Christian hope because it promises justice.

“I am convinced that the question of justice constitutes the essential argument, or in any case the strongest argument, in favor of faith in eternal life,” he said.

It is impossible for the Christian to believe that the injustices of history will be the final word, he said.
The Last Judgment should not evoke terror, however, but a sense of responsibility, the pope said. It is a moment of hope, because it combines God’s justice and God’s grace – but “grace does not cancel out justice,” he said.

“(Grace) is not a sponge which wipes everything away, so that whatever someone has done on earth ends up being of equal value,” he said. “Evildoers, in the end, do not sit at table at the eternal banquet beside their victims without distinction, as though nothing had happened.”

The pope said the idea of purgatory, as a place of atonement for sins, also has a place in the logic of Christian hope. Heaven is for the “utterly pure” and hell for those who have destroyed all desire for truth and love, but “neither case is normal in human life,” he said.

Thus, the souls of many departed may benefit from prayers, he said.

The pope began and ended his encyclical with profiles of two women who exemplified Christian hope. The closing pages praised Mary for never losing hope, even in the darkness of Jesus’ crucifixion.

The encyclical opened by describing a similar sense of hope in a 19th-century African slave, St. Josephine Bakhita, who after being flogged, sold and resold, came to discover Christ.

With her conversion, St. Bakhita found the “great hope” that liberated and redeemed her, the pope said.

The pope emphasized that this was different from political liberation as a slave. Christianity “did not bring a message of social revolution,” he said, but something totally different: an encounter with “a hope stronger than the sufferings of slavery, a hope which therefore transformed life and the world from within.”