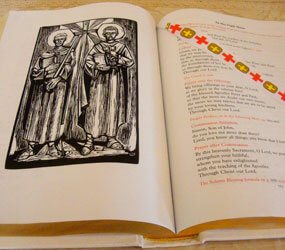 VATICAN CITY – After nine years of work involving Vatican officials, English-speaking bishops around the world and hundreds of consultants, Pope Benedict XVI received a complete version of the English translation of the Roman Missal.

The white-bound, gold-edged missal, which contains all of the prayers used at Mass, was given to the pope during a luncheon April 28 with members of the Vox Clara Committee, an international group of bishops who advise the Congregation for Divine Worship and the Sacraments about English liturgical translations.

“Soon the fruits of your labors will be made available to English-speaking congregations everywhere,” the pope told the Vox Clara members.

“Many will find it hard to adjust to unfamiliar texts after nearly 40 years of continuous use of the previous translations,” the pope said, which is why “the change will need to be introduced with due sensitivity.”

The pope thanked the Vox Clara members and all those who contributed to the translation process because “through these sacred texts and the actions that accompany them, Christ will be made present and active in the midst of his people.”

The new English-language Missal is a translation of the Latin edition officially promulgated by Pope John Paul II in 2000 and released in 2002.

The copy given to the pope includes the “recognitio,” or approval for use, dated March 25, 2010, and signed by Cardinal Antonio Canizares Llovera, prefect of the worship congregation, and U.S. Archbishop J. Augustine Di Noia, congregation secretary.

Chicago Cardinal Francis E. George, president of the U.S. Conference of Catholic Bishops, said that while the overall text has been approved for use, editions with specific adaptations for each country are pending. He said he expected the “recognitio” for the U.S. version before the end of May.

While Catholics definitely will notice the new translation, Cardinal George said, the change will be “far less dramatic than going from Latin to English was.”

“When they see what a beautiful text it is, many people will welcome it,” the cardinal told Catholic News Service April 29. Some people, for a variety of reasons, will not like the translation, he said, “but in the end it will be the text the church uses for prayer.”

Archbishop Terrence Prendergast of Ottawa, a member of Vox Clara, told CNS that members expect bishops’ conferences in most English-speaking countries to begin using the new translation starting in Advent 2011.

After the Vox Clara meeting in January, the archbishop said, members left Rome wondering if it would be finished in time for the April meeting. The congregation and a group of volunteers working with Monsignor James P. Moroney, former executive director of the Secretariat for the Liturgy at the U.S. Conference of Catholic Bishops, “made sure that every line was checked and rechecked,” he said.

Before a copy was presented to the pope April 28, the Vox Clara members were briefed on “how they brought the final version together – how the final recensions were made, the copy editing and the consultation with different people on how it sounded,” he said.

Because the missal was translated in parts and approved in sections by the various bishops’ conferences, some prayers that are used only occasionally had been translated slightly differently in different parts of the missal. The congregation determined which of the translations to use consistently, the archbishop said.

“While we may have had some reservations when we first started the project – you know, ‘I’d rather this than that’ – we began to see that the thing really came together and was a wonderful work of collaboration among the different countries of the world,” Archbishop Prendergast said.

“I think we have a majestic, reverent text that is going to be a great contribution to the church,” he said.

The Latin missal text was translated into English by the International Commission on English in the Liturgy, a body established by English-speaking bishops’ conferences. The conferences voted on each text and requested some specific wording for use in their own countries. The texts approved by the bishops’ conferences were forwarded to the Vatican for approval. The congregation examined the texts with input from the members of the Vox Clara Committee.