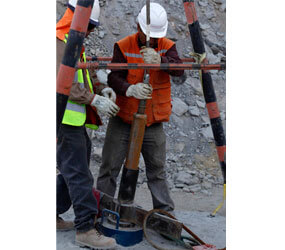 CASTEL GANDOLFO, Italy – Pope Benedict XVI offered his prayers for the 33 men trapped underground in a gold and copper mine in Chile.

At the end of his Angelus address Aug. 29, the pope prayed that the miners remain calm as rescue workers begin an excavation process that could take up to three months to free them.

The workers at the San Jose mine near the Chilean city of Copiapo were trapped Aug. 5 when part of the mine collapsed; rescuers made their first contact with the miners 17 days later. The men apparently are in good health and supplies are being sent down to them through a narrow pipe.

The pope said, “I entrust them and their families to the intercession of St. Lawrence, assuring them of my spiritual closeness and my continual prayers so that they maintain their serenity in the hope of a happy conclusion of the work that is being carried out to rescue them.” St. Lawrence is patron saint of miners.

Also at the Angelus, Pope Benedict had special words of welcome for the 60 new seminarians beginning their studies at the Pontifical North American College in Rome.

The students at the U.S. seminary sang for the pope “Ad Multos Annos” (“To Many Years”), wishing him a long life, and the pope responded with applause.

The pope told the seminarians, as well as English-speaking pilgrims, that he hoped their time in Rome would help them “to draw closer to the Lord in prayer and thanksgiving.”