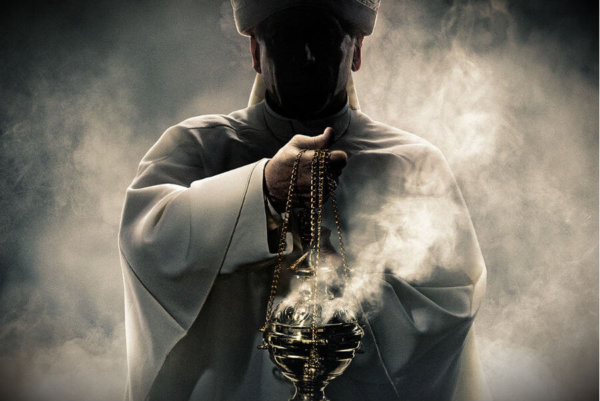 This is a scene from CNN's new docuseries "Pope: The Most Powerful Man in History." Narrated by popular Catholic actor Liam Neeson, the series debuts Sunday, March 11, 10-11 p.m. EDT, and will air in that slot throughout its six-week run, concluding Sunday, April 15. (CNS photo/CNN)

NEW YORK — It may be slightly overproduced, but CNN’s new docuseries “Pope: The Most Powerful Man in History” will nonetheless intrigue, edify and challenge viewers.

Narrated by popular actor Liam Neeson, the series debuts Sunday, March 11, 10-11 p.m. EDT, and will air in that slot throughout its six-week run, concluding Sunday, April 15.

Themes of war, prostitution, adultery, murder, out-of-wedlock births, as well as some mild sensuality, make this unsuitable fare for younger TV fans. Given that these elements serve the series’ broader educational aims, however, this is apt programming for adults and mature adolescents.

Director Randy Counsman combines dramatic re-enactments with extensive commentary from writers, scholars and theologians to amplify this far-reaching, but not exhaustive, papal history. The filmmakers properly marvel that an institution that began with one man — St. Peter — now numbers its spiritual followers at 1.2 billion.

The legacy of the papacy is, as the documentarians correctly note, inextricably intertwined with that of Peter himself — whom they describe, somewhat melodramatically, as “the leader of an underground movement, and an outlaw.” Indeed, according to the filmmakers, in those early days, “any follower of Christ” was viewed by the authorities “as a threat to the Roman Empire.”

In 64 A.D., after two-thirds of Rome was consumed in a historic and infamous fire, the Emperor Nero scapegoated the Christians for causing the conflagration. Peter was caught in the ensuing raids, and convicted of insurrection.

Sentenced to crucifixion, Peter insisted upon being executed upside down because, as Anthea Butler, a University of Pennsylvania associate professor of religious studies, says, he didn’t feel “worthy to die the same way as the Lord.”

The lot of Christians improved considerably during Emperor Constantine’s fourth-century reign. The heretofore pagan commander of the Western Roman army experienced a celebrated vision of the Cross before his decisive battle with the forces of his Eastern counterpart, a sign which he viewed as a promise of victory from Jesus.

Vindicated by the outcome of the clash, Constantine, as ruler of the whole empire, consistently favored his Christian subjects. It was only shortly before his death, some 25 years later, however, that he requested and received baptism.

Constantine’s enduring influence on the church can be seen, in the filmmakers’ accurate view, in his convening of the Council of Nicea in 325 and his establishment of Constantinople as the capital of Eastern Christendom. Attempting to resolve doctrinal disputes over Jesus’ divinity and humanity, the council was a unifying force, which produced the Nicene Creed.

Founding a home for the Eastern church in Constantinople, conversely, may have contributed to the eventual schism between Orthodoxy and Catholicism — though that split was only permanently formalized more than seven hundred years later.

The excessive spending, bribery and sexual indiscretions which marked the Renaissance-era papacies of Alexander VI (Rodrigo de Borgia) and Leo X (Giovanni de’ Medici), as the documentarians point out, engendered serious divisions within the church. But they also led to important, necessary reforms.

“Pope: The Most Powerful Man in History” covers a lot of ground and provides a fine overview of its subject both for those who may have forgotten this aspect of history and for those who, regrettably, never learned about it in the first place. Viewers, however, shouldn’t let Nick Murray’s hyper-dramatic musical score distract them from the benefits of the series.

Counsman employs the score relentlessly to amplify the drama and tension. But there’s more than enough in this chronicle to keep viewers engaged without such gratuitous embellishment.