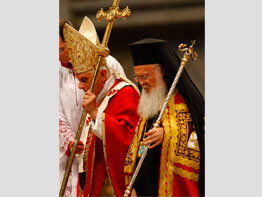 ROME – Joined by other Christian leaders, Pope Benedict XVI opened the year of St. Paul and said the apostle’s courageous witness to the faith should serve as a model for contemporary Christians.

“Paul is not a figure of the past that we remember with veneration. He is also our teacher, an apostle and a herald of Jesus Christ for us, too,” the pope said at an evening prayer service June 28 in the Rome Basilica of St. Paul Outside the Walls.

The liturgy had a strong ecumenical tone. Accompanied by Orthodox Ecumenical Patriarch Bartholomew of Constantinople and representatives of Orthodox and Anglican churches, the pope lit the first candle from a large lamp that will burn in the basilica’s portico throughout the coming year.

Then the pontiff led a procession through the “Pauline door” into the church, which was built near the site of St. Paul’s martyrdom and holds his tomb. It was the inaugural event of a jubilee year that will run until June 29, 2009, in commemoration of the 2,000th anniversary of the apostle’s birth.

Seated near Patriarch Bartholomew, the pope said in a homily that the Pauline year should send a strong signal of Christian unity. He warmly greeted the other Christian representatives, including many who had come from areas where St. Paul evangelized – in the Holy Land, Syria, Greece, Cyprus and Asia Minor.

St. Paul understood the essential value of Christian unity because he understood the church as the “body of Christ,” the pope said. In St. Paul’s time and in every age, repairing divisions is an urgent task, he said.

“Who was this Paul?” the pope asked in his sermon. He cited the saint’s own self-description as a Jew who was educated in Jerusalem according to strict ancestral law, and who later became, through an encounter with Christ, the “teacher of the gentiles in faith and truth.”

“We are not gathered here to reflect on a past history that is irretrievably surpassed. Paul wants to speak to us – today,” he said.

The year of St. Paul was Pope Benedict’s idea, and he has encouraged local church communities around the world to read and reflect on the apostle’s contribution to Scripture.

The pope used his opening homily to do the same, examining three Pauline texts. St. Paul’s Letter to the Galatians, he said, underscored the fact that his own faith was the product of a personal encounter with Jesus Christ. That simple truth is relevant today, the pope said.

“His faith is not a theory, an opinion about God and the world. His faith is the impact of God’s love on his heart. And so this same faith is love for Jesus Christ,” he said.

The pope next pointed to St. Paul’s First Letter to the Thessalonians, in which the apostle made it clear that announcing the Gospel required courage and was never free from struggle.

The important thing for St. Paul, the pope said, was never to hide the truth or sacrifice it in order to obtain a “superficial harmony.”

Finally, the pope cited St. Paul’s Second Letter to Timothy, in which he reflected on the fact that his years of evangelizing had brought him suffering.

St. Paul understood that “there is no love without suffering,” and that “in a world in which the lie is powerful, truth is paid in suffering,” the pope said.

After the pope spoke, Patriarch Bartholomew also delivered a short homily, noting St. Paul’s immense influence on the history of the churches of the East.

In joining the Greek language and the Roman mentality of his time, the patriarch said, St. Paul had freed the church from any kind of restricted outlook and laid the foundations for the “catholic,” or wide-ranging, scope of its mission.

Earlier in the day, the pope and Patriarch Bartholomew met at the Vatican. In a speech, the pope said he was pleased to learn that the ecumenical patriarch, too, had arranged for a Pauline year for his Orthodox faithful.

The pope said St. Paul’s emphasis on unity applied not only to Christian churches, but also in a wider sense to a modern culture that is marked by persistent conflicts and divisions.

The contemporary man or woman is confused and in a sense “ensnared by a certain hedonistic and relativistic culture, which places in doubt the very existence of truth,” the pope said.

Christian churches need to respond together to that challenge, and St. Paul’s words and actions can help promote this kind of cooperation, he said.

At a noon blessing at the Vatican June 29, the pope noted that the Pauline year would focus on Rome, where several pilgrimage sites related to the apostle have been readied. But it also involves places in Turkey, the Holy Land, Malta and other countries where St. Paul preached, he said.

According to tradition, St. Paul was born in Tarsus – in what is today Turkey – around A.D. 8, and was beheaded in Rome around 67.

In recent years, Vatican experts examined the area beneath the main altar of the Basilica of St. Paul and said they had identified definitively as the tomb of the apostle a marble sarcophagus bearing the inscription “Paul Apostle Martyr.”

Because it is buried beneath building material, the experts decided against trying to open the sarcophagus, which is only partly visible.