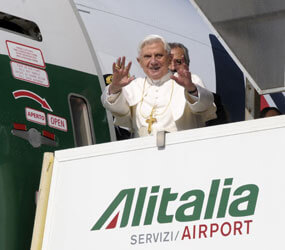 ABOARD THE PAPAL FLIGHT TO CAMEROON – Making his first trip to Africa, Pope Benedict XVI said the Catholic Church can help bring answers to the continent’s chronic problems, including poverty, AIDS and tribalism.

Speaking to reporters aboard his Alitalia chartered jet March 17, the pope strongly defended the church’s efforts to fight AIDS and said condom distribution only made the problem worse.

“One cannot overcome the problem with the distribution of condoms. On the contrary, they increase the problem,” the pope said.

Nor can the AIDS pandemic be confronted only with aid programs, he said.

What the church teaches, he said, is “humanization of sexuality” and sexual responsibility on the one hand, and a willingness to be present with those who are suffering, on the other hand.

He pointed to the many church programs currently helping AIDS victims and said the church’s contribution had led to real and visible progress.

The U.N. office monitoring the pandemic reports some 22 million Africans living with HIV, the virus that causes AIDS; that number represents about 67 percent of all HIV-positive people in the world. The office also reported that 74 percent of all AIDS-related deaths in 2007 occurred in sub-Saharan Africa.

Church officials estimate that Catholic institutions and programs provide about one-fourth of all health care to AIDS victims.

Discussing the global economic crisis, the pope told reporters he intended to appeal to the international community not to forget Africa. He said he was going to Africa with a spiritual program, not a political or economic one, but that his message could provide part of the solution to the current crisis.

“A fundamental element of this crisis is a deficit of ethics in economic structures. Economics does not function if it does not carry with it ethical elements,” he said.

Asked about the proliferation of religious sects in Africa, the pope said he thought the appeal of religious sects does not last very long among Africans. These sects, he said, promise prosperity, but after a while Africans see that life goes on and problems remain.

For that reason, he said, Africans are attracted to Christianity, which offers a God who is man, a God who suffers with human beings and is therefore closer to them.

The pope said he saw not only problems in Africa, but also many signs of hope, including political reform, new efforts against corruption and the opening of traditional native religions to the Christian faith.

The pope also said the growth of Catholicism in Africa, the sense of belonging to the great Catholic family, is helping the continent overcome tribalism.

He also said the church’s relationship with Muslims in Africa is generally good, despite occasional problems that can arise.

“Mutual respect is growing, as well as cooperation and common ethical responsibility,” he said.

The pope took six questions from journalists aboard the plane, which was taking him to Cameroon, the first stop on a seven-day trip that would also take him to Angola.

The first question was about what some newspapers have described as the pope’s solitude in the face of recent controversies and criticism, including those surrounding his lifting the excommunication of four bishops from the traditionalist Society of St. Pius X.

One of the four, Bishop Richard Williamson, has denied the extent of the Holocaust, and after a public outcry, the Vatican made it clear the bishop would have to recant and publicly apologize before he could be fully reinstated in the Catholic Church.

Pope Benedict told reporters: “I have to laugh a bit about this myth of my solitude. In no way do I feel alone. I am really surrounded by friends, close collaborators, bishops and laypeople.”