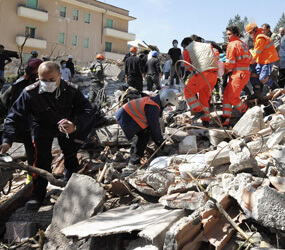 VATICAN CITY – Just hours after an earthquake hit the city and province of L’Aquila in central Italy, causing more than 200 deaths and major damage to churches and other buildings, Pope Benedict XVI offered his prayers for the dead, their loved ones and rescue workers.

The quake struck April 6 at 3:30 a.m. local time and was felt strongly even in Rome, about 70 miles west of L’Aquila.

Among the victims was Abbess Gemma Antonucci, head of the Poor Clares’ Convent of St. Clare in Paganica, outside L’Aquila.

In an interview with SIR, the news agency of the Italian bishops’ conference, Father Dionisio Rodriguez Cuartas, the pastor in Paganica and director of Caritas L’Aquila, said the roof of the Poor Clares’ convent caved in.

In the early afternoon, rescue workers were able to recover the body of the abbess and to free another nun from the debris. Two of the dozen members of the community were hospitalized with broken bones; the others were unharmed.

Italian Prime Minister Silvio Berlusconi said April 7 that 207 people were confirmed dead and 15 people were still missing and feared dead. In the first 36 hours after the quake, more than 150 people were extracted alive from fallen buildings, he said.

The government also estimated that 17,000 people were left homeless; 6,000 hotel rooms on Italy’s Adriatic coast were opened to those whose homes were destroyed, tent cities were erected and the Italian train company sent sleeper carriages to the area.

Using different measuring methods, Italian seismologists said the main quake registered a magnitude of between 5.8 and 6.3 on the Richter scale.

In a telegram to Archbishop Giuseppe Molinari of L’Aquila, the Vatican secretary of state said Pope Benedict had asked him to convey his “participation in the pain of the dear population struck by this tragic event.”

“In assuring fervid prayers for the victims, particularly the children, His Holiness invokes the Lord to comfort the families, and while he addresses affectionate words of encouragement to the survivors and those involved in the rescue operations, he sends all a special apostolic blessing,” Cardinal Tarcisio Bertone told the archbishop.

Archbishop Molinari told SIR that many of the churches in his diocese had been damaged or totally destroyed; his residence and chancery also were heavily damaged.

The region had been experiencing small quakes for weeks, he said.

“Thank God I was not in my room asleep because I did not feel very safe,” he said; instead he went to his office to deal with paperwork.

As soon as the quake hit, he left the building with a priest and the nuns he lives with, the archbishop said.

“The most beautiful churches” in L’Aquila and nearby towns were destroyed, he said, listing five buildings. And, like the Poor Clares’ convent, the cathedral was damaged when several sections of the roof caved in.