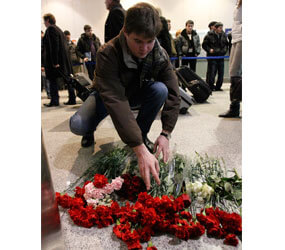 VATICAN CITY – Pope Benedict XVI condemned the suicide bombing at Moscow’s Domodedovo Airport and offered his prayers for the 35 people who died, for the dozens who were injured and for the victims’ families.

The suicide bombing took place Jan. 24 in the international arrivals hall of the airport; officials said at least 35 people died and more than 150 were injured. No one immediately claimed responsibility for the bombing, although militants from Russia’s North Caucasus region were widely suspected.

Pope Benedict offered his condolences to the Russian leader and asked the Lord for “heavenly comfort for those who mourn” and offered his blessing to the injured.

In Moscow, Father Igor Kovalevsky, secretary-general of the Russian bishops’ conference, said people were “stunned by this tragic blow to Russia.”

He told Catholic News Service Jan. 25 that services had been held at Catholic parishes nationwide, and later that day an ecumenical prayer service for peace in Russia was to be held in Moscow’s Immaculate Conception Catholic Cathedral.

The Italian president of the Russian bishops’ conference expressed “grief and sorrow” at the “new and terrible act of violence.”

“Our first thought goes to the victims – at moments like these, when death strikes unexpectedly, our certainty is that there, where no one can accompany us, Christ awaits us,” Moscow Archbishop Paolo Pezzi told the Italian news service SIR Jan. 25.

“We are still dismayed and puzzled at how this act of violence was perpetrated, so we pray to Our Lady that she may protect and help us all not to lose our reason and love for life, that we may never choose death as a solution,” he said.

Russian Orthodox Patriarch Kirill of Moscow said perpetrators of the “horrible crime” had “put themselves outside (the) law, both human and divine,” and called on Russians to “unite to fight the inhumane attacks that kill innocent people.”

“All resources of the state and society should be used to ensure reliable protection of our citizens,” Patriarch Kirill said in a statement on the Moscow Patriarchate’s website.

“The location of the explosion, an airport which people use to go on business trips and vacation, indicates the terrorist attack was targeted against the civilian population. There is and there can be no justification for such criminal aggression,” he said.

Father Kovalevsky said he “greatly feared” the attack would exacerbate anti-Caucasus feeling in Russia. The region is predominantly Muslim, and he said Muslims as a whole should not be “blamed or judged” for the incident.

“I wouldn’t want to evaluate the Russian government’s policy toward the Caucasus, since this is a purely political matter. Instead, our church’s task is to proclaim moral principles and draw attention to values which should be protected by politicians – above all, human life, which cannot be taken away in such a manner,” he said.