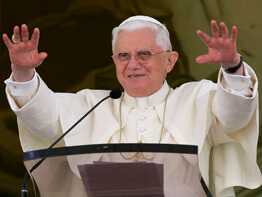 CASTEL GANDOLFO, Italy – Pope Benedict XVI pointed to the Northern Ireland peace process as an example to “other troubled zones of our world” that all conflict can be overcome peacefully.
After 30 years of conflict, peace in Northern Ireland was “achieved through widespread international support, determined political resolve on the part of both the Irish and the British governments, and the readiness of individuals and communities to embrace the sublime human capacity to forgive,” he said.
The pope made his comments in a Sept. 15 address to Ireland’s new ambassador to the Vatican, Noel Fahey, who presented his credentials to the pope at the papal summer villa in Castel Gandolfo.
The entire world “has taken heart” from the success of the Northern Ireland peace process, which sent a “wave of hope” that “conflict, no matter how ingrained, can be overcome,” the pope said.
Fahey told the pope the new executive of the devolved government led by its first minister, the Rev. Ian Paisley, “has shown great commitment to the well-being of all of the people in Northern Ireland” and that “the Irish government is working closely with the new executive for the benefit of all of the people on the island of Ireland.”
The pope said he hoped Northern Ireland’s “long and arduous” efforts for peace would “bear enduring fruit.”
He said he fervently wished political and religious leaders of the world would be inspired by what was done in Northern Ireland and “recognize that only upon forgiveness, reconciliation and mutual respect can lasting peace be built.”
The pope also applauded a new initiative of “structured dialogue” between the church and the Irish government.
He said listening to the church express essential moral and ethical principles shows that “far from threatening the tolerance of differences or cultural plurality, or usurping the role of the state,” it “illuminates the very truth which makes consensus possible and keeps public debates rational, honest and accountable.”
When truth is abandoned, political decisions are made based on public opinion rather than guided by principles and “indeed the very categories of good and evil, and right and wrong, give way to the pragmatic calculation of advantage and disadvantage,” said the pope.
He also said he hoped people’s concern for the environment would open up to an overall concern for life.
He said “a kind of split morality” exists in some circles where people recognize God’s hand in the creation of the majestic beauty of the natural world, but they refuse to acknowledge God’s hand in creating humankind.
“How disturbing it is that, not infrequently, the very social and political groups that, admirably, are most attuned to the awe of God’s creation pay scant attention to the marvel of life in the womb,” he said.
“God’s loving act of creation must be understood as a whole,” he said.
Pope Benedict said he hoped people’s growing interest in the environment, especially among the young, would “deepen their understanding of the proper order and magnificence of God’s creation of which man and woman stand at the center and summit” above the natural, material world.