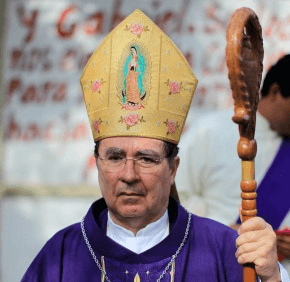 By Catholic News Service
WASHINGTON –Pope Francis has appointed Archbishop Christophe Pierre, papal nuncio to Mexico since 2007, to be the new apostolic nuncio to the United States.
He succeeds Archbishop Carlo Maria Vigano, who has been in the post since 2011. Archbishop Vigano turned 75 in January, the age at which canon law requires bishops to turn in their resignation into the pope.
As president of the U.S. Conference of Catholic Bishops, Archbishop Joseph E. Kurtz of Louisville, Kentucky, shared “a heartfelt greeting and my prayerful support” of the newly named nuncio “as he embarks on his service to our country.”
“A shared closeness with the church in Mexico already creates a strong fraternal bond between us,” said the archbishop about the April 12 appointment.
“With fond affection, allow me also to thank Archbishop Vigano for his selfless contributions to the life of the Catholic Church in the United States,” Archbishop Kurtz added.
MORE TO COME
Copyright ©2016 Catholic News Service/U.S. Conference of Catholic Bishops.
PrevNext