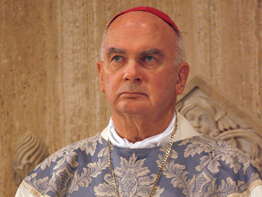 The pope announced the names at the end of his weekly general audience Oct. 17 and said he would formally install the cardinals during a special consistory at the Vatican Nov. 24.

Cardinal-designate Foley was in St. Peter’s Square when the announcement was made; he told Catholic News Service he had gone into the square, wading into the midst of the crowd, after going to a doctor’s appointment.

While rumors were running strong that the pope would name cardinals at the end of the audience and his nomination was almost a given, Cardinal-designate Foley said he was shocked to be the second name announced by the pope. The order in which the cardinals are announced determines their seniority in the College of Cardinals, which has little practical effect except in liturgical processions.

Naming 18 cardinals under the age of 80, the age limit set for voting in a papal conclave, Pope Benedict said he was setting aside the limit of 120 potential papal electors established by Pope Paul VI and confirmed by Pope John Paul II.

After the new cardinals are installed in late November, there will be 121 potential voters.

The 23 new cardinals will bring the total membership of the College of Cardinals to 202.

The nomination of Cardinals-designate Foley and DiNardo brings to 17 the number of U.S. cardinals; after the consistory, the U.S. contingent will include 13 potential papal electors.

The November ceremony will mark the second time Pope Benedict has created cardinals since his election in April 2005. At a March 2006 consistory, he created 15 new cardinals.

After he had read the 23 names, Pope Benedict told the estimated 30,000 people in St. Peter’s Square that “the new cardinals come from various parts of the world,” and “they reflect the universality of the church with its multiple ministries: Alongside the prelates deserving for the service they have given to the Holy See there are pastors who devote their energies to direct contact with the faithful.”

Continuing a papal custom, among the new cardinals were five churchmen over the age of 80, whom Pope Benedict said he wanted to honor because they were “particularly deserving because of their commitment to the service of the church.”

Pope Benedict said he also had planned to name 93-year-old retired Bishop Ignacy Jez of Koszalin-Kolobrzeg, Poland, but “the well-deserving prelate” died unexpectedly Oct. 16, the day before the new cardinals were announced.

The longtime Vatican official, who served at the Vatican nunciature in the United States from 1989 to 1991, became the voice of Pope John Paul when the pope became too weak to read the full texts of his speeches near the end of his pontificate.

Cardinal-designate Foley, who for 23 years served as president of the Pontifical Council for Social Communications, will celebrate his 72nd birthday Nov. 11.

A native of Philadelphia, he studied at the Columbia University journalism school and served as editor of The Catholic Standard & Times, Philadelphia archdiocesan newspaper, before Pope John Paul called him to the Vatican to head the social communications office. In June, Pope Benedict named him pro-grand master of the Knights of the Holy Sepulcher, a chivalric organization dedicated to supporting the Latin Patriarchate of Jerusalem and to responding to the needs of Catholics in the Holy Land.

Known to millions of people as the English-language commentator of papal Christmas midnight Masses, the archbishop said he had tried to merge his love for God and the media.

“In my work as a priest and as an archbishop, I am able to do two things I love very much: to be active in communications and to tell people about Jesus,” he said May 6 in a commencement address to students at the University of Portland, Ore.

Cardinal-designate DiNardo, 58, was born in Steubenville, Ohio, and was ordained a priest of the Diocese of Pittsburgh in 1977.

After serving for six years in the diocese, he moved to Rome, where he worked in the Congregation for Bishops for six years. While in Rome, he also taught at Gregorian University.