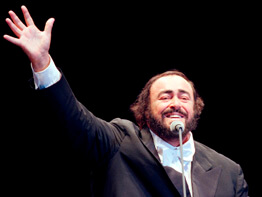 MODENA, Italy – Pope Benedict XVI mourned the death of Luciano Pavarotti and praised the Italian tenor for his extraordinary talent.
In a telegram sent to Archbishop Benito Cocchi of Modena-Nonantola, the pope offered his condolences for the death of this “great artist who honored the divine gift of music through his extraordinary interpretative talent.”
The archbishop read aloud the telegram Sept. 8 during the Catholic funeral Mass held in the city’s cathedral, where Pavarotti had sung as a child in the choir.
Catholic News Service obtained a copy of the telegram from the Vatican Sept. 10.
Thousands of mourners turned out for the ceremony to honor Pavarotti, who died Sept. 6 at the age of 71 after a long battle with pancreatic cancer.
Former U.N. Secretary-General Kofi Annan was present for the funeral along with Italian Prime Minister Romano Prodi, numerous Italian pop stars, and U2 singer Bono. Pavarotti was divorced and remarried; his first wife of more than 30 years, his widow and his children were also present.
Italian tenor Andrea Bocelli and Bulgarian soprano Raina Kabaivanska sang for the funeral ceremony.
In his homily, Archbishop Cocchi praised the artist who also “expressed himself in charity for those who suffered,” reported the media.
Through his annual “Pavarotti and Friends” charity concerts, Pavarotti performed with pop stars like Elton John, Sting and Bono, raising money for victims of war and poverty. He also performed benefit concerts for refugees, the poor and victims of natural disasters.
His internationally recognized generosity often overshadowed tax evasion scandals back home. He was convicted of dodging Italian tax payments in 1999 and was acquitted after a second charge in 2001.