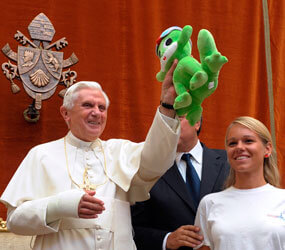 CASTEL GANDOLFO, Italy – Pope Benedict XVI met with participants in the world swimming championships and asked them to be models of values and behavior for young people around the world.

“Be champions in sports and in life!” the pope told about 100 athletes and trainers during an encounter Aug. 1 at the papal summer villa in Castel Gandolfo.

The pontiff posed for photos and donned the official cap of the swimming championships, which were being held in Rome. He accepted a German athletic jersey from German swimmer Paul Biedermann, who defeated American Michael Phelps in the 200-meter freestyle event, setting a new world record.

The pope, who wore a cast on his right hand after breaking his wrist two weeks earlier, called the swimming championships a “spectacle of discipline and humanity, of artistic beauty and tenacious determination.”

He said the athletes’ experience of tough months of training and sacrifices was itself an important lesson to young people.

“When practiced with passion and a careful sense of ethics, sports becomes — especially for young people — a training ground for healthy competitiveness and physical preparation, a school for human and spiritual values, and a privileged means of personal growth and contact with society,” he said.

He said the swimming championships had also highlighted the beauty and the athletic potential that God has given the human body. He said the competition evoked the words of Psalm 8, which describes how the Creator made humans “little less than a god, crowned them with glory and honor.”

At the end of the encounter, the pope told the athletes, “I hope that you will always ‘swim’ toward the highest ideals.”