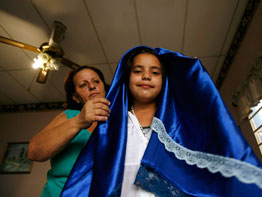 VATICAN CITY – The many “difficulties and limitations” placed on the Catholic Church in Cuba have not stopped it from growing and from reaching out to help the poor and the sick, Pope Benedict XVI said.

“Continue carrying out a bold and generous effort of evangelization which will bring the light of Christ to all spheres and places,” the pope told the bishops of Cuba May 2 at the end of their “ad limina” visits, in which they reported on the status of their dioceses.

“At this moment in history, the church in your country is called to offer the entire Cuban society the one true hope: Christ Our Lord, victor over sin and death. This is the force that has kept Cuban believers firmly on the path of faith and love,” the pope said.

Archbishop Juan Garcia Rodriguez of Camaguey, president of the Cuban bishops’ conference, told the pope, “At this moment in Cuba there is talk of changes which the people and the church greet with hope.”

“We ask the Virgin of Charity that these changes would make Cuba a more fraternal and peaceful land, guided by the principles of the common good, subsidiarity, participation and solidarity and by the fundamental values of truth, charity, justice and freedom,” he said.

Raul Castro succeeded his brother, Fidel, as president of Cuba in February. During nearly 50 years of rule by Fidel Castro, his government began institutionally dismantling the church, nationalizing Catholic schools and expelling priests. Church activity was restricted, church programs were monitored, and Cubans were discouraged from attending worship services, with churchgoers discriminated against when seeking state and university employment. Some of those restrictions lessened toward the end of Fidel Castro’s rule, although a U.S. embargo against Cuba remains in effect.

Archbishop Garcia also asked Pope Benedict to visit Cuba in 2012 to help celebrate the 400th anniversary of Cuban devotion to Our Lady of Charity. Tradition holds that a 15-inch statue of Mary identified as Our Lady of Charity was found in 1612 in the Bay of Nipe; the statue is now at a popular shrine in El Cobre.

“What great joy it would be for Cuba to be able to count on the presence of the successor of Peter for the great celebration of the jubilee year,” he said. “The people desire this, ask for this, beg this of the universal pastor, the father of all Catholics.”

Pope Benedict did not respond publicly to the invitation, but he praised the Cuban church for its fidelity, its unity and its commitment to social service.

He asked the Cuban bishops to dedicate their best human and financial resources to the training of priests and asked them to make marriage and family life and the education of the laity their pastoral priorities.

“A committed laity, conscious of their vocation and mission in the church and in the world,” can be formed only if they have help in learning to pray, understanding the basics of Christian faith and embracing the social teaching of the church, the pope said.

Pope Benedict said he supported the Cuban bishops’ efforts to secure a voice in the world of the media, and he expressed particular concern for families torn apart by divorce or by migration.

In an interview with the Vatican newspaper, Archbishop Garcia said, “Despite many years of silence about God, in Cuba there is a growing religious thirst and an ever-increasing devotion, especially to Our Lady of Charity, the patron of the country.”

He told L’Osservatore Romano that a new wave of evangelization has begun among Cuba’s children and “now they are evangelizing their parents and grandparents.”

Groups of teens and young adults, he said in the interview published May 1, are “living the commandments and the beatitudes despite being mocked and marginalized.”

Archbishop Garcia said the Cuban bishops wanted to explain to Pope Benedict “our healthy pride in the people who have remained faithful to Christ and his church throughout the long years in which they were criticized” for believing.

“The Cuban church is a small and fragile flock. But at the same time, it is faithful, open, serving, joyful and happy to live its faith and proclaim it,” the archbishop said.

“In our churches, you find Catholics and potential Catholics, people who follow popular religions and syncretistic believers, as well as diverse political opinions,” he said. “The church welcomes them as a mother and guides them on the path toward Jesus Christ, prince of peace and teacher of truth.”

Archbishop Garcia said the Catholic Church in Cuba suffers from a serious lack of priests; the nation has about 11 million residents, but only about 340 priests.

“It is clear that the harvest is plenty but the laborers are few,” he said. “Yet the thirst for God continues to grow.”

He said he continues to hope that the government will approve the church’s request to be allowed to celebrate Mass in the prisons for Christmas, Holy Week and during the novena of preparation for the feast of Our Lady of Charity.