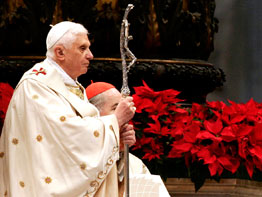 “The natural family, founded on marriage between a man and a woman, is the cradle of life and love and the first and indispensable teacher of peace,” the pope said at a Mass Jan. 1, which the church marks as the World Day of Peace.

The family thus constitutes the primary agency of peace, and attempts to deny or restrict family rights “threaten the very foundations of peace,” he said.

Later, at a noon blessing, the pope returned to the theme of the family and what he called its “strict connection” to social peace. He quoted from his World Peace Day message on the theme “The Human Family, a Community of Peace.”

“Whoever, even unknowingly, circumvents the institution of the family undermines peace in the entire community, national and international, since he weakens what is in effect the primary agency of peace,” he said.

The pope was not specific about efforts to weaken the family, but in the past he has spoken out against gay marriage and laws that give full legal recognition to cohabiting couples.

Thousands of people filled St. Peter’s Basilica for the New Year’s liturgy; among the crowd was a group of children wearing cardboard crowns in memory of the three kings who traveled to Bethlehem.

Prayers for peace were offered in five languages; in Arabic, the prayer asked that the world’s populations would “overcome suggestions of violence and war and commit all their energy and resources to building a stable peace.”

In his homily, the pope said people should recognize that true peace is not merely the result of human efforts or political agreements. Above all, he said, peace is a divine gift that people need to continually implore.

The pope also noted that Jan. 1 marked the feast of Mary, Mother of God. He said Mary can serve as a guide to modern Christians who have trouble believing that Jesus is both God and man.

“At the ‘school’ of Mary we can accept with the heart that which the eyes and the mind cannot perceive by themselves,” he said.

The mystery of the Incarnation and Mary’s divine maternity should be welcomed in faith “even without understanding everything,” he said.

In his talk to pilgrims after the Mass, the pope expressed the hope for a “serene and productive” 2008 and extended New Year’s greetings in seven languages.

“May the peace proclaimed by the angels at Bethlehem take ever deeper root in men’s hearts and inspire the whole human family to live in harmony, justice and fraternal solidarity,” he said in English.