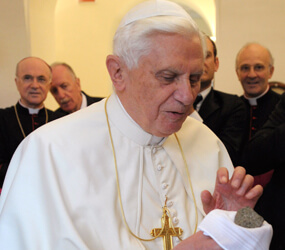 Pope Benedict spent the evening of Sept. 16 in the company of papal astronomers who conduct study and research in Castel Gandolfo, outside of Rome, and at its other research center in Tucson, Ariz.

His hourlong visit began with “a very beautiful prayer and blessing” for the staff and official inauguration of their new headquarters, said Father Coyne, the former director of the Vatican Observatory.

The pope also blessed a dedication plaque in the main-floor entrance area and took a leisurely tour inside, visiting the new library, conference room, staff offices and laboratory. The new facility is located in a renovated monastery about one-and-a-half miles from their previous location inside the papal palace.

Father Coyne said the pope “looked very carefully at the exhibits we have” and readily accepted the invitation of U.S. Jesuit Brother Guy Consolmagno to hold a meteorite.

The pope was given a special pair of gloves worn to prevent contamination of the specimen, which, according to Father Coyne, was the Nakhla meteorite – a fragment of a larger meteorite from Mars that fell in the Nakhla region near Alexandria, Egypt, in 1911.

The pope was led to the new headquarters’ second floor to say a prayer in the chapel and then pose for a group picture on the terrace.

Afterward, the Jesuit astronomers treated the pope to a small reception of cookies and orange soda. The whole event was “very informal and cordial,” said Father Coyne.

He said the visit “was magnificent because it shows the pope’s personal interest in our work. After all, it’s his observatory.”

“He was curious about all we do in Arizona so we had some very nice photographs of our mountain observatory in Arizona” to show the pope and explain the reason most of their research is done there, said the Jesuit priest.

The Vatican Observatory set up a second research center in Tucson in 1981 after the skies above their telescopes in Italy got too bright for nighttime observation.

The Vatican Observatory’s headquarters had been located inside the papal palace at Castel Gandolfo since 1935, when it was moved from Rome to escape the nighttime light pollution coming from city streets.

But the papal astronomers had expanded their activities so much in recent years with their popular summer school for budding scientists and research-related events that “we were overusing our facilities in the papal palace,” said Father Coyne.

The decision to move to separate and larger facilities had been made many years ago, he said. Astronomers started to move into their new, more modern headquarters this spring.

Father Coyne said the pope was scheduled to give an address to astronomers from all over the world, including members of the International Astronomical Union and the head of the American Astronomical Society.

The event, marked for Oct. 30 at the Vatican’s Pontifical Academy of Sciences, is one of the Vatican’s many initiatives to celebrate the International Year of Astronomy.