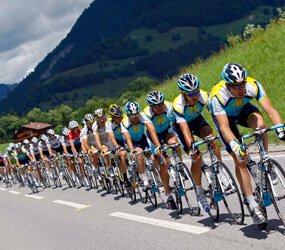 The pope sent “cordial greetings to all the athletes and organizers of the race” July 21, the day the tour passed near the village of Les Combes, where he was spending his vacation July 13-29.

The competitive cyclists rode through the northern Italian region of Valle d’Aosta on stage 16 of the 21-stage Tour de France.

In his message, the pope said he was thinking of all those who were taking part in sports activities or participating in athletic competition this summer. He expressed his hopes “that their commitment to sports may contribute to the integral development of the person” and that sports would be respectful of moral and educational values.