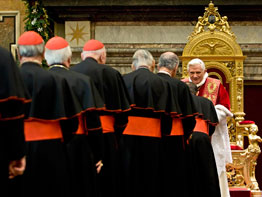 VATICAN CITY – Pope Benedict XVI gave his Roman Curia officials the traditional bottle of “spumante” and panettone cake for Christmas, and he added a gift they can chew on for days: a seven-page speech on the Holy Spirit’s presence in the church events of 2008.

As every year, the pope met Dec. 22 with his top administrators to exchange Christmas greetings and review the year as it draws to a close. His talk was not a simple “Best of ‘08” list, however, but a probing analysis of what lies behind some of the church’s most visible activities.

In particular, he offered his own take on two issues that prompted headlines in recent months, but whose meaning the pope evidently believes is misunderstood: the international World Youth Day celebrations and the Vatican’s increasingly strong pronouncements on ecology.

The pope recalled his trip to Australia for the World Youth Day mega-gathering in July, where he presided over events with 200,000 young people from around the world. Fears of paralyzed traffic or public disturbances proved unfounded, he said, and the encounter turned out to be a “festival of joy.”

But what kind of celebration was it? he asked. Some view these World Youth Day gatherings as the church’s version of a rock concert, where the pope is just the main attraction, he said. Others, including Catholics, wonder whether they really have any lasting impact on the participants.

The pope responded by saying these objections don’t take into account the power of the Holy Spirit. It was typical of the academic pontiff that in explaining this point he quoted first the German philosopher Friedrich Nietzsche, who once said throwing a party wasn’t as hard as finding people able to attend it with joy.

Then he quoted St. Paul, who said joy is the fruit of the Holy Spirit – something abundantly evident at World Youth Day. He pointed out that the Australian assembly was the culmination of a long spiritual pilgrimage for the young participants, one focused intensely on Christ.

“So even the pope is not the star around which all this turns,” he said.

Those who describe the youth encounters as the Catholic variant of rock festivals, he added, are really trying to remove the all-important “question of God” from the discussion.

In a similar way, the pope said, the church’s teaching on ecology needs to be understood as arising from God – the “creator Spirit” – who made the earth and its creatures with an “intelligent structure” that demands respect. Because of faith, the church has a responsibility for protecting the created world and for proclaiming publicly this environmental responsibility, he said.

The pope then explained why the human being must be at the center of the church’s ecological concern.

“The church must protect not only the earth, the water and the air as gifts of creation that belong to everyone. It must also protect man against self-destruction,” he said. “The tropical forests certainly deserve our protection, but man as a creature does not deserve any less.”

By “self-destruction,” the pope said he meant “contempt for the Creator,” and he said examples could be found in so-called “gender” issues today. He offered a case in point: Marriage as a permanent union between a man and a woman was something instituted by God as “the sacrament of creation.”

Although the pope didn’t specifically talk about same-sex marriage, the meaning was clear enough to prompt some unusual headlines about rain forests and homosexuals.

The pope said the Holy Spirit was the protagonist of another important event of 2008, the Synod of Bishops on Scripture. The synod emphasized that, far from being a dead letter, the word of God is alive and is speaking to contemporary Christians in a modern Pentecost, he said.

In ending his speech, the pope returned to St. Paul’s description of joy as a fruit of the Spirit. The pope underlined a point he’s made occasionally throughout the year: that Christianity should be seen not as a religion of rules and prohibitions, but as a source of joy that springs from Christ’s salvation.

“He is joy. Joy is the gift in which all other gifts are summed up. It’s the expression of happiness, of being in harmony with oneself, which can only happen when one is in harmony with God and his creation,” he said.

The nature of joy is to radiate, and to want to communicate itself to others – and in a nutshell, that’s the missionary spirit of the church, he said.

He left his Roman Curia members with his Christmas wish: that this kind of joy stay alive and spread through a world filled with tribulations.