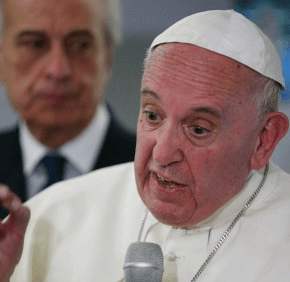 JOINT BASE ANDREWS – “Pope Francis, we love you – Pope Francis, yes we do,” chanted youths from the Archdiocese of Washington as they waited to catch a glimpse of the Holy Father before he boarded a plane for New York.

On Sept. 24 at about 4 p.m., the pope’s now-trademarked Fiat arrived at his waiting plane. Onlookers cheered as his car, preceded and followed by a few dozen black SUVs, police cars and motorcycles, arrived at the base of the red carpet that led to the stairs to the plane.

Before boarding, Pope Francis spoke with Maryland Gov. Lawrence J. Hogan Jr., who earlier that day had received a blessing from the pope on behalf of all those suffering from cancer, as well as Hogan’s wife, Yumi.

Secretary of State John Kerry and his wife, Theresa Heinz Kerry, also conferred with the pope before he made the final climb into the American Airlines plane, gave a final wave, and departed for New York.

“It was a great day,” said Gould. “I think for us what stuck out the most was the ability to make the pope feel welcome, like he makes so many others feel welcome.”

Accompanying Gould was his wife, Katie, and Rudy Dehaney, who heads youth and young adult ministries at St. Mary of the Assumption in Govans, St. Matthew in Northwood and Church of the Blessed Sacrament in Baltimore. Nick Stein, young adult ministry leader for the Sisters of Bon Secours, and Rachel Barron of the Archdiocese of Baltimore Missions Office also took the opportunity to say goodbye to the pope.

On a whirlwind visit to Washington, Pope Francis covered a lot of bases and several topics, including his views on addressing climate change. In a meeting with President Obama, he commended the president for his initiative in reducing air pollution.

“Climate change is a problem that can no longer be left to a future generation,” Pope Francis told Obama, adding that behaviors must be changed now.

“We still have time to make the changes needed to bring about ‘a sustainable and integral development, for we know that things change,’” the pope said, quoting his encyclical, “Laudato Sí,” according to his prepared remarks.

“Such change demands on our part a serious and responsible recognition not only of the kind of world we may be leaving to our children, but also to the millions of people living under a system which has overlooked them,” Pope Francis added.

The pope also spoke on religious freedom, and alluded to the threats it faces in this country.

Speaking with Obama, he expressed his support for the U.S. bishops, who, who he said, “have reminded us, all are called to be vigilant, precisely as good citizens, to preserve and defend that freedom from everything that would threaten or compromise it.”

The bishops have voiced concerns, about the mandate that employers – including Catholic employers – pay for contraceptive coverage through their employee’s health plans, and about the June Supreme Court ruling that states may not legally define marriage as being between a man and a woman.

Later on Sept. 23, the pope would visit the Little Sisters of the Poor, who are currently in a battle with the government over that very issue.

Obama also spoke about religious freedom, but in the context outside of America, of Christians being persecuted and killed for their beliefs on other continents.

The topic of immigration surfaced again and again in Pope Francis’ speeches, homilies and prayers.

Meeting most of the U.S.’s more than 400 bishops for mid-day prayer Sept. 23 at St. Matthew’s Cathedral, he urged them to to welcome the stream of immigrants flowing into the U.S.

“I ask you to excuse me if I am in some way pleading my own case,” he said pointedly. “Perhaps it will not be easy for you to look into their soul; perhaps you will be challenged by their diversity.”

“Offer them the warmth of the love of Christ and you will unlock the mystery of their heart,” he said. “I am certain that, as so often in the past, these people will enrich America and the church.”

Also in his prayer meeting with the bishops, Pope Francis highlighted injustice, including “the innocent victim of abortion, children who die of hunger or from bombing, immigrants who drown in the search of a better tomorrow, the elderly and the sick who are considered a burden, the victims of terrorism, wars, violence and drug trafficking, the environment devastated by man’s predatory relationship with nature.”

He said that “at stake in all of this is the gift of God, of which we are noble stewards but not masters.”

The family was a major topic for the pope, who mentioned it to the bishops and during his address to Congress Sept. 24. To the bishops, he hinted at his agenda during his upcoming visit to Philadelphia, where he will land Sept. 26.

“No less important is the Gospel of the family,” he said, “which in the World Meeting of Families in Philadelphia I will emphatically proclaim together with you and the entire church.”

“How essential the family has been to the building of this country,” he told Congress.

“Yet I cannot hide my concern for the family, which is threatened, perhaps as never before, from within and without,” he said. “Fundamental relationships are being called into question, as is the very basis of marriage and family.”

At the Sept. 23 canonization Mass for St. Junípero Serra at the Basilica of the National Shrine of the Immaculate Conception, Pope Francis used the missionary saint’s motto as a rallying cry for the church.