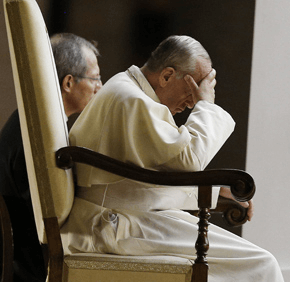 By Catholic Review Staff
As U.S. government leaders meet this week to discuss the possibility of military strikes against Syria, Pope Francis is leading the Catholic Church on an extraordinary campaign for worldwide peace. He has repeatedly called on world leaders to come up with a peaceful solution to the conflict in Syria through dialogue and negotiation.
Below are eight recent quotes and tweets from Pope Francis on why world leaders should focus on world peace in place of violence.
1. “Jesus does not need an army to fight evil in the world; he uses the victorious weapons of love and humility.”
– Morning Mass in the Domus Sanctae Marthae Sept. 3.
2. “Never has the use of violence brought peace in its wake. War begets war, violence begets violence.”
– Before praying the noon Angelus with a crowd in St. Peter’s Square
3. “How I wish that all men and women of good will would look to the cross, if only for a moment. There, we can see God’s reply: violence is not answered with violence, death is not answered with the language of death. In the silence of the cross, the uproar of weapons ceases and the language of reconciliation, forgiveness, dialogue and peace is spoken.”
-Leading a crowd in a prayer vigil for peace in Syria Sept. 7 in St. Peter’s Square. Pope Francis had a serious demeanor and failed to wave or smile, which added to the vigil’s solemn atmosphere.
4. “And the doubt always remains: This war over there, this other war over there — because there are wars everywhere — is it really a war over problems, or is it a commercial war, to sell these arms on the black market?”
-Speaking about the illegal arms trade before praying the noon Angelus with a crowd in St. Peter’s Square Sept. 8.
Over the last week, Pope Francis has repeatedly utilized his @Pontifex Twitter accounts to campaign for world peace and warn of the dangers of war. These are some of his top calls for peace on social media:
PrevNext