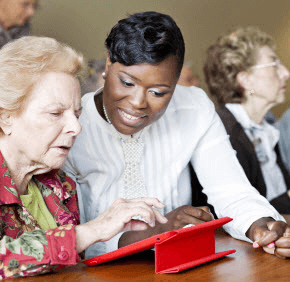 By Maria Wiering
mwiering@CatholicReview.org
Twitter: @ReviewWiering
PARKVILLE – When Barbara Zorn got her first iPad in 2011, she didn’t know how to use it. She reached out to Scott Phillips, a fellow resident of Oak Crest Retirement Community and longtime Mac techie. He helped her to grow in proficiency, and in January, the pair launched a group for iPad and other tablet users.
About 25 to 30 Oak Crest residents attend the free monthly meetings, which address members’ questions and cover topics on iPad use, such as changing tablet settings, backing up files and downloading applications, “or apps.”
The group is the newest of Oak Crest’s technology-based clubs. Another longtime group focuses on personal computing. A retired certified public accountant, Brooks Hubbert, 76, joined the PC group years ago with little computer knowledge, but now teaches some of its classes. The group maintains a computer lab that is open to dues-paying computer group members.
Personal technology sometimes gets a bad rap for isolating its users from social activities, but for the seniors at Oak Crest, it opens up a world beyond the community’s 85 acres, said Phillips, 77.
Thanks to Skype, a video-chat program, Hubbert watched a grandchild learn to walk within hours of the child’s first steps. Another resident used it to play a harmonica-clarinet duet with his great-great-granddaughter in Australia, whom he’s never met in person. E-mail and Facebook, not telephone, are often the best ways for seniors to get in touch with children and grandchildren.
In addition to connecting Oak Crest residents to life outside of Oak Crest, the classes build community among computer- and-tablet-using residents, providing socialization in addition to ongoing support for learners.
Their devices may be different, but PC and tablet club leaders see themselves as partners in helping others, including total beginners, access the benefits of technology.
Phillips, retired from the U.S. Army after working in research and development at the Aberdeen Proving Ground, had his first personal computer in 1984 and was an early Macintosh adopter. Few Oak Crest residents have his experience, but more are arriving computer literate.
Some, such as Zorn, a retired business administrator, used a PC daily, but learned how to use a Mac at Oak Crest. Others get their start when they receive an iPad, or when family members unload old technology on them.
The latter is not recommended; out-of-date operating systems can hinder rather than help a senior adopt technology, Phillips said.
Zorn, 75, explained that seniors are eager to learn new things.
“We recognize that technology is advancing,” she said, “and if we don’t get on board, we’re going to be left behind.”
The iPad group highlights the device’s useful tools, from calendars to combat forgetfulness to apps that organize medical history. Phillips maintains a list of useful apps such as Pillboxie (a pill-taking reminder) and Evernote (a memo-saver) on the group’s website. Residents use the Internet to shop, order groceries for delivery and download books at Baltimore County Public Library’s website.
With a tablet, any book can be read in large print.
“We’re really pleased with the way our age group is learning,” Zorn said. “We’ve had people come to our class with an iPad in hand that they’ve either won in a raffle, or that their children or grandchildren have given them, and they have not a clue about technology.”
One of Zorn’s favorite success stories is that of an 86-year-old woman who was in that situation. She learned to use FaceTime, the iPad’s video calling function, and now spends Sunday afternoons talking to family members scattered across the United States.
“That is our privilege: to see results,” Zorn said.
Also see:
Jessup parishioner applies know-how to need with new sewing ministry
PrevNext