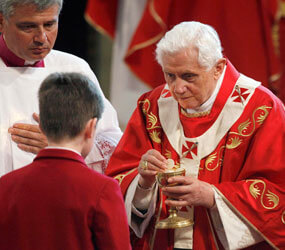 LONDON – In a personal meeting with five victims of clerical sexual abuse, Pope Benedict XVI expressed his “deep sorrow and shame” over their suffering and promised the church would do “all in its power” to investigate cases of abuse and safeguard the young.

The encounter Sept. 18 in London took place just hours after the German pontiff, speaking at a Mass in Westminster Cathedral, denounced what he called the “unspeakable crimes” committed by some priests against young people.

The Vatican said in a statement that during the 30-minute meeting with victims, the 83-year-old pope was “moved by what they had to say and expressed his deep sorrow and shame over what victims and their families had suffered.”

“He prayed with them and assured them that the Catholic Church is continuing to implement effective measures designed to safeguard young people, and that it is doing all in its power to investigate allegations, to collaborate with civil authorities and to bring to justice clergy and religious accused of these egregious crimes,” the statement said.

The group included four women and one man, all adults, who came from England, Scotland and Wales. Each had time to speak “with great intensity and emotion” about their suffering, the Vatican spokesman, Jesuit Father Federico Lombardi, told reporters.

He said the pope prayed with them at the beginning and the end of the encounter; the only other people present were three people who work with abuse victims and a translator.

The Vatican said the pope had “prayed that all the victims of abuse might experience healing and reconciliation, and be able to overcome their past and present distress with serenity and hope for the future.”

Asked whether 30 minutes was enough time for the pope to have given the victims, Bill Kilgallon, head of the National Catholic Safeguarding Commission, said: “It’s longer than the prime minister got.”

Although the encounter was unannounced, it had been widely expected. The pope has previously met with abuse victims in the United States, Australia and Malta, and the Vatican has said such meetings are part of an effort to implement the pope’s own call for “absolute transparency” over sexual abuse and its commitment to reconciliation with victims.

Even as the London meeting took place, however, protesters in another part of the city – including some sex abuse victims – accused the pope of protecting priests who have abused minors. Critics said the pope’s actions to date have failed to address the accountability issue in the church.

Later in the afternoon, the pope held an unscheduled meeting with the church’s child protection officers and said their efforts have helped ensure that allegations of abuse are dealt with “swiftly and justly.”

“While there are never grounds for complacency, credit should be given where it is due: the efforts of the church in this country and elsewhere, especially in the last 10 years, to guarantee the safety of children and young people and to show them every respect as they grow to maturity, should be acknowledged,” he said.

At Westminster Cathedral, speaking in a homily to an overflow crowd at his only public Mass in London, the pope focused on the image of the suffering Christ, and he connected it to “the immense suffering caused by the abuse of children, especially within the church and by her ministers.”

“Above all, I express my deep sorrow to the innocent victims of these unspeakable crimes, along with my hope that the power of Christ’s grace, his sacrifice of reconciliation, will bring deep healing and peace to their lives,” he said.

“I also acknowledge, with you, the shame and humiliation which all of us have suffered because of these sins; and I invite you to offer it to the Lord with trust that this chastisement will contribute to the healing of the victims, the purification of the church and the renewal of her age-old commitment to the education and care of young people,” he said.

The pope expressed his gratitude for the efforts to confront the sex abuse problem in the church, and he asked all Catholics to “show your concern for the victims and solidarity with your priests.”

In Britain, after dozens of priestly sex abuse cases came to light in the late 1990s, bishops adopted a series of measures to protect children, setting up a national office for child protection and encouraging the appointment of trained child protection officers in each parish and school. The bishops also made a commitment to turn every case of alleged child abuse over to the police.

On the plane carrying him to Great Britain Sept. 16, Pope Benedict said the church was not vigilant enough or fast enough in responding to cases of sexual abuse.

“These revelations were for me a shock, and a great sadness. It is difficult to understand how this perversion of the priestly ministry was possible,” he said. He said helping the victims overcome trauma was the church’s first priority, and said perpetrators must never be allowed access to children.

The pope’s comments have consistently drawn criticism from sex abuse victims’ advocacy groups like the U.S.-based Survivors Network of those Abused by Priests, known as SNAP. His remarks on the plane were also dismissed by critics.

“It’s disingenuous to say church officials have been slow and insufficiently vigilant in dealing with clergy sex crimes and cover ups. On the contrary, they’ve been prompt and vigilant, but in concealing, not preventing, these horrors,” said Joelle Casteix in a statement published on the SNAP Website.

Among the relatively small number of protesters demonstrating against the pope’s visit in Britain, were those holding signs and banners that read: “Put the pope on trial” and “Pope, protector of pedophile priests.”

The liturgy at Westminster Cathedral featured Latin and English-language prayers, and was attended by representatives of other Christian churches, including Anglican Archbishop Rowan Williams, who hosted the pope the day before at the Anglican headquarters in London.

The pope noted the giant crucifix that dominates the nave of the cathedral, and said this striking image and its connection with the eucharistic sacrifice was at the heart of the Catholic faith.

“Here in England, as we know, there were many who staunchly defended the Mass, often at great cost, giving rise to that devotion to the most holy Eucharist,” he said.