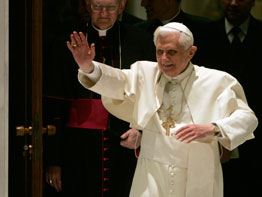 VATICAN CITY – Pope Benedict XVI said he hoped the church’s Holy Week and Easter rituals would help deepen all Catholics’ conversion to Christ and their solidarity with those who suffer.

At his March 19 general audience in the Vatican’s Paul VI hall, the pope explained the meaning of the liturgies the church was to celebrate in the coming days.

The Easter triduum lets the faithful share in the mystery of Christ’s suffering, death and resurrection, he said, and represents “the heart and climax of the liturgical year as well as the life of the church.”

He asked the thousands of pilgrims present to use this holy period to let their lives be guided by God and to “renew our ‘yes’ to the divine will just as Jesus did with his sacrifice on the cross.”

The moving ceremonies celebrated during Holy Week and Easter “offer us an opportunity to deepen the meaning and value of our Christian vocation,” said the pope.

The liturgies are not simply a remembrance of the past, he said; they also entail a deeper reflection of and greater commitment to “today’s history.”

Therefore, he said, let everyone also dedicate prayers to the dramatic events and situations “that afflict many of our brothers and sisters in every part of the world.”

“We know that hatred, division, violence never have the last word in history’s events,” he said, adding that Easter was a time to revive the great Christian hope that the “crucified Christ is risen and conquered the world.”

“Love is stronger than hatred” and won the battle against death and evil; “we have to align ourselves with this triumph of love,” said the pope.

People must start with Christ and work together with him in order to build a world “based on peace, justice and love,” he said.

The pope also reminded everyone of the importance of confession, especially on Holy Saturday. He said the sacrament of reconciliation is an “indispensable way to purify the heart” and prepare for Easter.

“We need this inner purification, this renewal of ourselves at least once a year,” he said.

Before his general audience in the Paul VI hall, the pope greeted some 3,500 university students attending an Opus Dei-sponsored conference. He greeted them in St. Peter’s Basilica and asked them to be catalysts for hope in a world that is often not even aware of its deep yearning for Christ.

The best way to change the world for the better, he told them, is to “above all change yourselves through an intense sacramental life,” especially through the sacraments of penance and the Eucharist.

During his audience, the pope received good wishes in a number of different languages because it was the feast of St. Joseph; Pope Benedict’s birth name is Joseph Ratzinger.