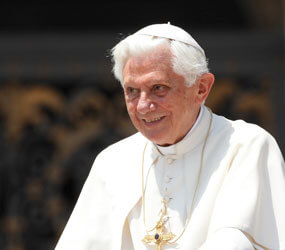 VATICAN CITY – Humility and perseverance in prayer is rewarded by a true encounter with God, Pope Benedict XVI said.

At his weekly general audience May 25 in St. Peter’s Square, Pope Benedict said God’s blessing cannot be won by force but rather “must be received with humility from him.”

The pope continued his series of audience talks about prayer, using the story of the biblical patriarch Jacob, who was challenged by an unidentified foe as he prepared to cross a river.

After a struggle that lasted all night, Jacob, who appeared to be winning, demanded that his opponent bless him. The man turned the tables by asking Jacob his name, which the pope said was like appropriating “the deepest reality of the individual, revealing secrets and destiny.”

The challenger gave Jacob the name Israel, the pope said, which showed that even though the patriarch won the fight, he finally recognized that he had been battling with God, who gave him a new and honest identity.

The pope said the story “speaks to us of a long night in search of God, of the struggle to know his name and face.” It describes “the night of prayer that with tenacity and perseverance asks God for a blessing and a new name, a new reality that comes from conversion and forgiveness.”

Pope Benedict said the story shows believers how to understand the relationship with God “that finds its greatest expression in prayer,” which, he said, “requires faith, closeness, almost a body-to-body struggle.”

The pope said the lives of Christians “are like this long night of struggle and prayer” in which believers seek a blessing from God “that cannot be taken or won by force, but that must be received with humility from him, as a gift that will finally let us see the face of the Lord.”

After his talk, the pope gave a special greeting to 45 people from the St. Petersburg, Fla.-based Wounded Warrior Project, an organization that seeks to help veterans from both the Afghanistan and Iraq wars recover from physical and mental trauma and re-engage in society.

At the end of the audience, Bishop Daniel R. Jenky of Peoria, Ill., gave the pope two white leather-bound volumes with documentation for the sainthood cause of the late Archbishop Fulton J. Sheen, the creator of the 1950s television program “Life is Worth Living.” The archbishop died in New York in 1979.