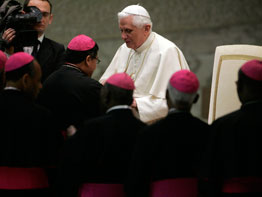 VATICAN CITY – Even in the face of terrible misfortune and suffering, true happiness is possible as long as one continues to have hope in God, Pope Benedict XVI said.

When personal disaster strikes, only true friends stick around, and one of those true friends is God, he said.

Boethius, born in Rome around 480, was imprisoned, tortured and executed at 44 years of age, the pope said. The Christian martyr wrote his best-known work of philosophy while he was in jail, “De Consolatione Philosophiae.”

The pope called him a “symbol of a huge number of detainees unjustly” imprisoned throughout history and the world today.

The Christian writer struggled to “find consolation, find light, find wisdom” during his imprisonment and realized that those harsh conditions allowed him to discover what things in life were superficial.

Boethius “concluded that true happiness lies in continuing to hope in God despite adversity,” the pope said.

Boethius also learned that it was important “to not sink into fatalism that extinguishes hope,” he said.

“To fatalistically accept a condition of suffering is absolutely dangerous,” Boethius teaches, because it uproots the possibility for the prayer and hope that lie at the foundation of every person’s relationship with God, the pope said.

“That way, even in prisons, the possibility for prayer, dialogue with the one who saves, always remains,” he said.

Boethius wrote that “wickedness cannot prevail over knowledge” because evil rules with force and is based on lies, the pope said.

Boethius wrote not only to help find consolation for himself, but to bring consolation to all people who might find themselves unjustly imprisoned, the pope said. Boethius urged people to “fight all vices, dedicate yourselves to a virtuous life guided by hope” and reminded detainees that an unfair sentence could always be overturned.

The pope said it is “particularly absurd” when a prisoner is “tortured to death for no other reason than his or her own ideals and political and religious convictions.”

The pope also mentioned the teachings of Cassiodorus, a Roman statesman and monk who lived from 490 to 585.

The pope said Cassiodorus promoted the monastic movement and believed monks were the best people to salvage, preserve and pass down the cultural heritage of classical Christian culture. Searching for God must be “the permanent aim of monastic life,” he said.

Pope Benedict said Cassiodorus, like Boethius, “was a model of cultural meeting, of dialogue, of reconciliation.”

Cassiodorus urged monks to keep their eyes on Christ, that way “the enemy will never in fact find a foothold in order to attack you if all of your attention is focused on Christ,” the pope said.

The pope said Cassiodorus’ warning is applicable for people today because “we, too, live in a time of a meeting of cultures, of danger of violence that destroys cultures,” so there is need for people “to hand down the great values and teach new generations the path of reconciliation and of peace.”

“We find this path by pointing ourselves toward the God with the human face, the God revealed to us in Christ,” the pope said.

While Pope Benedict normally offers greetings in several languages at the end of his main catechesis in Italian, this time he included greetings in Latin. Addressing a group of two dozen Latin students and professors from Sweden, the pope said he wanted to “strengthen and encourage them” in their studies.