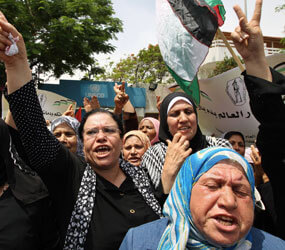 VATICAN CITY – Pope Benedict XVI deplored an assault by Israeli commandos on a flotilla of ships taking aid to the Gaza Strip, calling the series of events “tragic” and “very painful,” as well as a cause concern for all those who long for peace in the region.

He also called on world leaders and local politicians to do all they could to improve the living conditions in Gaza, which Israel has blockaded since 2007, when the Islamic militant group Hamas took control of the territory.

“Once again I repeat with a heavy heart that violence does not resolve controversies, but rather it augments the dramatic consequences and spawns more violence,” he said at the end of his general audience talk in St. Peter’s Square June 2.

The pope made an appeal to all political leaders on local and international levels to “unceasingly seek just solutions through dialogue so as to guarantee the people in the area better living conditions, in harmony and serenity.”

In Geneva, the Vatican’s representative to U.N. organizations there, Archbishop Silvano Tomasi, said “a full, impartial and transparent investigation into the latest incident, based upon international law and international humanitarian law, is necessary.”

Speaking at an emergency U.N. debate June 1 in Geneva concerning the Israeli raid, Archbishop Tomasi said it was “clear that the humanitarian needs of the people of Gaza” were not being met.

“All parties involved and the international community have a responsibility to cooperate so that the fundamental human rights of those persons are implemented,” he said.

At least nine people were killed when Israeli special forces boarded the ships in international waters in the early morning hours May 31 in an attempt to stop the vessels from reaching the Palestinian territory of Gaza. Dozens were wounded in the ensuing fight between Israeli commandos and activists.

The flotilla, bearing building materials, medications and other aid materials, was formed to try to breach the three-year-old blockade of Gaza.

The Israeli government said May 31 that its commandos acted in self-defense and that they were attacked when they boarded the ships via helicopter after the flotilla ignored warnings to change course.

“The intent of the militants was violent, the methods they employed were violent, and unfortunately, the result was violent,” the Ministry of Foreign Affairs said in a statement. Footage released by the Israeli Defense Forces showed clubs, knives and bags of marbles it said were used to attack the commandos, whom it said were armed only with paint guns and personal weapons.

The assault received widespread international condemnation. A statement issued by the U.N. Security Council deplored the violence and called for “a prompt, impartial, credible and transparent investigation conforming to international standards.”

June 1 was a day of mourning and protests in the Gaza Strip, as well as other countries, including Malaysia and Indonesia.

In Gaza, the parish priest, Father Jorge Hernandez, expressed concern that the raid on the flotilla would result in more violence.

“The climate here is heavy and the risk of an escalation of violence is very real, which is why we are calling for caution and prudence,” he said.

Father Hernandez told the Italian bishops’ news agency, SIR, that it was a tragedy that the attacks occurred during the May 29-June 4 World Week for Peace in Palestine and Israel, promoted by the World Council of Churches.

“I do not know how to express our disappointment in such a thing, which should have and could have been avoided,” the priest said. “Israel said that it would block every attempt to reach Gaza. Israel has the means to prevent and control these situations. It was not necessary to arrive at the point of killing, and now the risk is that the violence will lead to more violence. There already are people talking about vengeance and reprisals.”

In a May 31 interview with Vatican Radio, Father Hernandez said the Israeli of blockade of the Gaza Strip has produced a situation in which “the lack of nearly any product has made prices soar to the sky. Medicine and other necessary goods are extremely costly. The situation has been getting worse day by day.”

In a statement, the Jerusalem Inter-Church Center condemned “in the strongest language possible the irresponsible actions perpetrated by the Israeli forces against civilian participants of the Freedom Flotilla.” It called on people to take action that would see Israel adhere to international norms by ending the siege on Gaza and as well as its military occupation of the Palestinian territories.

“It is only through ending the unjustifiable ongoing military occupation of another people’s land that true peace can emerge,” it said. “It is tragic that no serious interventions were made from third parties to avoid such a tragic end for a good human action. The result of silence is death.”

Contributing to this story were Carol Glatz at the Vatican and Judith Sudilovsky in Jerusalem.