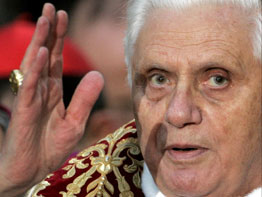 Even the most sacred things, “like the human body, temple of the God of love and life,” have been turned into objects of consumption, he said before praying the noonday Angelus Dec. 8, the feast of the Immaculate Conception.

“Adolescents, young people, even young children are easy victims of the corruption of love, deceived by unscrupulous adults who, by lying to them and themselves, lure them down the dead-end roads of consumerism,” he said, without specifically mentioning abuse or prostitution to pilgrims gathered in St. Peter’s Square.

“How sad when young people are robbed of the amazement, the enchantment of the most beautiful feelings” and the value of respecting the human body, he said.

Most young people growing up in a consumerist society are bombarded with “messages that offer false models of happiness,” the pope said.

He said these young people “risk losing hope because they often seem orphans of true love which fills life with meaning and joy.”

The pope said Mary is a shining star of hope that can lead those lost in the darkness to Jesus, the “true light, the sun.”

He said Mary, who was conceived free of original sin, reminds people of “God’s lofty and beautiful project for everyone: to become holy and immaculate in love in the image of our creator.”

Later that afternoon, Pope Benedict continued the feast day celebrations by making an afternoon visit to a Marian monument in the center of Rome.

The pope blessed a large basket of roses set at the foot of a column topped by a statue of Mary. The statue commemorates Pope Pius IX’s proclamation in 1854 that Mary, by special divine favor, was without sin from the moment she was conceived.

He told the rain-soaked crowd of 10,000 people to be inspired by Mary’s “fearless faith, unshakable hope, and humble and boundless love” as she followed in the footsteps of her son Jesus.

Mary invites every Christian to avoid evil and respect God’s will, to not lose heart “when suffering and death knock on our doors,” to look toward the future with hope, and to love one another as brothers and sisters, “united in the task of building a more just, supportive and peaceful world,” he said.

Mary, the mother of God, is also the mother of all humanity, he said. Because she is a symbol of the triumph of good over evil, Mary can act as a beacon of hope for all people, he said.

Pope Benedict said Mary points the way to God, who is the only answer to the world’s ills.

At the end of his homily, the pope greeted via satellite-television linkup pilgrims in Lourdes, France, who were celebrating the opening of the jubilee year marking the 150th anniversary of Mary’s appearance to St. Bernadette Soubirous.

On the second Sunday of Advent, during his Dec. 9 Angelus in St. Peter’s Square, the pope warned against losing the true meaning of Christmas to “a materialist mentality.”

The world today is experiencing desertlike conditions where people’s lives and inner beings “are thirsting for the life-giving water that is Christ.”

How a person lives life today determines his or her eternal fate, he said, warning that God will judge according to a person’s “concrete behavior” here on earth.

“We will be judged on the basis of our similarity” to Jesus who is “the standard God gave humanity to live by,” he said.