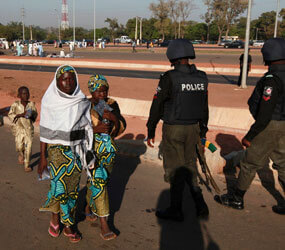 VATICAN CITY – Pope Benedict XVI appealed for an end to violence in Nigeria and prayed for victims of the most recent wave of civil conflict there.

“I am following with concern the tragic incidents that have occurred in recent days in Nigeria. As I pray for the victims, I call for an end to all violence, which never solves problems, but only increases them, sowing hatred and division even among believers,” the pope said.

The pope made the comments at his noon blessing Nov. 6, two days after attacks in Nigeria’s northeastern states of Yobe and Borno left more than 100 people dead. The attacks targeted churches, police stations and military barracks, Vatican Radio reported.

Officials blamed the violence on Boko Haram, a radical Muslim group responsible for previous attacks in the region.

Archbishop Ignatius Kaigama of Jos, vice president of the Nigerian bishops’ conference, condemned the attacks, saying that the radical group targets both Muslims and Christians.

“They attack Christians and Muslims indiscriminately. Our police are Christian and Muslim, they are even targeting other Muslim leaders. Boko Haram are not anti-Christian, they are anti-civil society,” Archbishop Kaigama told Vatican Radio.

He praised religious leaders of both faiths for working toward peace but also urged the Nigerian government to help eliminate violence through the education of young people.

“Many of the young people caught up in this extremist activity are illiterate, they have no education and no hope for the future. The government must give them the tools to become a constructive and not destructive force for the good of society,” the archbishop said.

Bishop Oliver Doeme of Maiduguri said one of the churches affected was a Catholic church in Damaturu. He said he talked to the parish priest, who did not say whether any of his parishioners were among those killed.

Bishop Doeme said the causes of the violence are social, economic, political and religious.

“In particular, there are some powerful people in our society who are losing their importance and use religion to incite the minds of uneducated youth to sow violence,” the bishop said. “In fact, these young people are exploited by greedy politicians who are losing relevance and want to still remain in power to continue to improve their finances.”

The bishop also spoke of “a strong level of indoctrination based on the belief that if one dies fighting for the cause, he will go to heaven.”