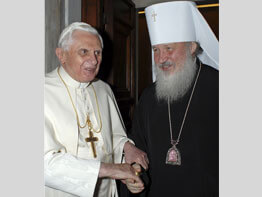 VATICAN CITY – Pope Benedict XVI said he learned “with joy” of the election of Metropolitan Kirill of Smolensk and Kaliningrad – a prelate he has met three times – as the new patriarch of the Russian Orthodox Church.

Patriarch-elect Kirill, 62, who had been in charge of ecumenical relations for the Russian Orthodox Church for the past 20 years, was elected patriarch of Moscow Jan. 27 on the first ballot cast by members of the church’s local council.

He will be enthroned Feb. 1 in Moscow as the successor of Patriarch Alexy II, who died in December after more than 18 years as head of the church.

At the end of his Jan. 28 general audience, Pope Benedict prayed that the new patriarch would be filled with “the light of the Holy Spirit for a generous service to the Russian Orthodox Church” and he entrusted the patriarch to “the special protection of the Mother of God.”

Pope Benedict also sent a congratulatory telegram Jan. 28 saying, “I ask the Lord to grant you an abundance of wisdom to discern his will, to persevere in loving service of the people entrusted to your patriarchal ministry and to sustain them in fidelity to the Gospel and the great traditions of Russian Orthodoxy.

“May the Almighty also bless your efforts to maintain communion among the Orthodox churches and to seek that fullness of communion which is the goal of Catholic-Orthodox collaboration and dialogue,” the pope wrote.

Cardinal Walter Kasper, who as president of the Pontifical Council for Promoting Christian Unity met Metropolitan Kirill dozens of times, said: “We are happy to have a patriarch with whom we have enjoyed fraternal relations for many years.

“We trust that we will be able to continue the common journey of reconciliation that we have begun,” said the cardinal, who was planning to fly to Moscow for Patriarch-elect Kirill’s enthronement liturgy.

Cardinal Kasper said he did not want to ignore difficulties remaining between the Catholic Church and the Russian Orthodox Church, but it was important to underline how committed the two churches are to cooperating “on a social and cultural level to witness to Christian values.”

Still, the cardinal said in a Jan. 28 statement that “the ultimate aim of dialogue is the fulfillment of the will of Jesus Christ, our lord, which is the full communion of all his disciples.”

“A church with this patriarch is good for others as well,” he said. “The relationship we have with Metropolitan Kirill, now patriarch, gives us hope for the continuation of dialogue, of common activities and of the intensification of our prayers for full unity.”

Archbishop Pezzi, who was at the Vatican for his “ad limina” visit to report on the status of his diocese, told Vatican Radio he “would not exclude” the possibility that under the new patriarch finally there could be a personal meeting between the pope and the head of the Russian Orthodox Church.

Despite the strong desire, first of Pope John Paul II and then of Pope Benedict, Patriarch Alexy repeatedly said that too many problems existed between the churches to make a meeting possible.

A personal encounter between the pope and the patriarch “is highly desirable,” Archbishop Pezzi said, and it would mark a step forward in the process toward full communion between the two churches.

In fact, the new leader of the Russian Orthodox Church, which claims more than 150 million members, met Pope Benedict immediately after the pope’s election in 2005, during a visit to Rome to consecrate a Russian Orthodox church in 2006, and for formal talks in December 2007.

The council which elected the new patriarch is made up of more than 700 bishops, priests, monks and laypeople representing each diocese and foreign mission of the Russian Orthodox Church. The delegates came from more than 60 countries.

Patriarch-elect Kirill was seen as the candidate most open to improving ecumenical relations, especially with the Catholic Church, although he often criticized papal actions taken to re-establish the work of the Roman Catholic Church in Russia.