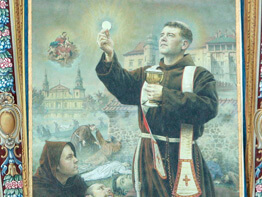 VATICAN CITY – Pope Benedict XVI canonized four new saints from Malta, Poland, the Netherlands and France and said they exemplified the many and varied forms of holiness in the church.

“God’s wisdom is manifested in the cosmos, in the variety and beauty of its elements, but his masterpieces are the saints,” the pope said during a rain-soaked liturgy June 3.

Some 40,000 pilgrims who huddled under umbrellas applauded as the pope read decrees proclaiming sainthood. Tapestry portraits of the newly canonized hung from the facade of St. Peter’s Basilica, and relics of the saints were carried to the altar, where the pope celebrated Mass beneath a white canopy.

The new saints were:
– St. George Preca (1880-1962), the first native saint of Malta and founder of the Society of Christian Doctrine, a group of celibate laypeople devoted to prayer, studying church teaching and instructing the young.

As a young priest, he had a vision of the child Jesus that stimulated his efforts to promote sound doctrine and formation among Catholics. The author of numerous books and booklets, he was also a renowned preacher who drew crowds of faithful wherever he went.

In the 1950s he suggested use of five “mysteries of light” for praying the rosary, an innovation later adopted by Pope John Paul II for the universal church.

In his sermon, Pope Benedict praised him as a consummate evangelizer, above all through the example of his own life. St. George’s liturgical feast is celebrated May 9.

– St. Simon of Lipnica (about 1435-1482), a Polish Franciscan who ministered to plague victims in Krakow before succumbing to the disease.
The pope said that although St. Simon lived in a distant age, he was being proposed by the church as a modern model of the Gospel spirit of sacrifice.
“Today in a particular way we entrust to his protection all those who suffer because of poverty, sickness, solitude and social injustice,” the pope said. The new saint’s liturgical feast day is July 30.

– St. Charles of St. Andrew Houben (1821-1893), a native of the Netherlands who, after joining the Passionist order, spent most of his life ministering in England and Ireland.

He was especially known for his healing touch, his ministry as a confessor and for insisting in his preaching that God’s love could not be understood unless people understood the passion and death of Jesus.

The pope noted that at the funeral of the much-loved priest, his superior was moved to observe, “The people have already declared him a saint.” His feast day is Jan. 5.

– St. Marie Eugenie de Jesus Milleret (1817-1898), who founded the Religious of the Assumption order when she was just 22 years old. Born to a nonbelieving and affluent family, she was inspired by a series of Lenten talks in Paris at age 19 and experienced a conversion.

Her religious order, which began in a small Paris apartment, began opening schools and today its members work in 34 countries. The pope, in his homily, underlined her commitment to the moral, intellectual and spiritual formation of younger generations. Her feast day is March 10.

In the audience were the presidents of Malta, Poland, Ireland and the Philippines. The Philippine delegation was there because the miracle attributed to the intercession of St. Marie Eugenie involved the cure of a young Filipina, Risa Bondoc.

Risa was born with a serious brain malformation, and doctors said she would never walk, talk or develop into a normal child. When she was a year old, she was taken to the Paris Assumption convent and laid on top of the tomb of St. Marie Eugenie as her adoptive parents prayed for a cure.

The following year, the girl had regained many functions and continued to show extraordinary progress as she grew up. She is now a 12-year-old student at an Assumption-run grade school, where teachers describe her as a good student with a high level of social skills.

At the Vatican canonization ceremony, Risa was part of the procession that carried offertory gifts to the altar.