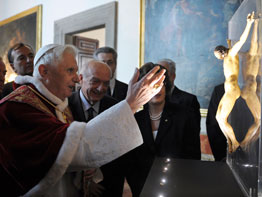 ROME – While church and state should be separate and respect each other’s role in society, they must cooperate to promote peace, solidarity and the good of all people, Pope Benedict XVI said.

“Conflicts and tensions between peoples make increasingly necessary the collaboration of all those who share the same ideals of justice, solidarity and peace,” the pope said Dec. 13 during a morning visit to Italy’s Embassy to the Holy See.

Pope Benedict was the fourth pope to visit the embassy, which was established after the 1929 Lateran Pacts settled the disputes between the Italian government and the papacy over the temporal rule of Rome and the former Papal States and formally recognized the independence of Vatican City.

The autonomy of church and state, the pope said, is something the Catholic Church not only recognizes, but also “rejoices in as a great progress for humanity and as a fundamental condition for its own freedom and for fulfilling its universal mission of salvation among all peoples.”

At the same time, the church feels an obligation “to reawaken moral and spiritual forces in society” so that all people would recognize and work for the common good, he said.

After wishing the Italian people a peace-filled Christmas, Pope Benedict said, “My wish for peace extends to all the countries of the earth.”

“It is a wish for light and authentic human progress, for prosperity and agreement – all of which are wishes we can make with trusting hope because they are gifts that Jesus has brought to the world by being born in Bethlehem,” the pope said.