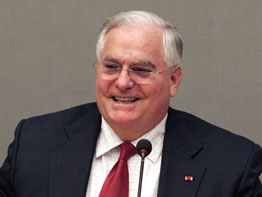 VATICAN CITY – Pope Pius XII worked courageously, secretly and silently to help save Jews targeted by the Nazis’ “criminal plan … to eliminate them from the face of the earth,” said Pope Benedict XVI.

“Wherever possible, (Pope Pius) spared no effort in intervening in their favor” and providing organized assistance to the Jews either directly or through others, including Catholic religious institutes, Pope Benedict told participants in an international symposium dedicated to examining the papacy of Pope Pius.

The pope held a Sept. 18 private audience at his summer residence south of Rome with some 80 attendees of the Sept. 15-17 symposium organized by the U.S.-based Pave the Way Foundation. Participants included members of the foundation and representatives of the Jewish community, including rabbis and scholars from around the world. The Vatican published a text of the remarks.

Thanking the foundation for its efforts in seeking the truth, Pope Benedict said that “not all of the genuine facets” of Pope Pius’ pontificate have been examined “in just light” in the 50 years since his death.

Critics have said they believe Pope Pius did not speak out clearly enough in defense of the Jews during World War II or was indifferent toward the victims of Nazism.

Pope Benedict said many of Pope Pius’ efforts to support the Jews were “made secretly and silently” because “in that difficult historical moment, only in this way was it possible to avoid the worst and save the greatest number of Jews.”

Gary Krupp, Jewish founder and president of the Pave the Way Foundation, told the pope in his speech that “the Catholic Church under the pontificate of Pius XII was instrumental in saving the lives of as many as 860,000 Jews from certain death at Nazi hands.”

Mr. Krupp told Catholic News Service after the audience that Pope Benedict “was very appreciative” of the organization’s extensive research, which had revealed clearly that the current negative perception of Pope Pius “is completely wrong.”

He presented the pope with nine video testimonies of Holocaust survivors and other eyewitnesses to Vatican humanitarian efforts, as well as the 200-page book of documentation compiled by the foundation and unveiled at the Rome symposium.

Dozens of Jewish representatives who believed Pope Pius had done nothing to help the Jews during the Holocaust had been invited to the symposium.

Many accepted the invitation, but some publicly critical of Pope Pius and representatives from three major Jewish museums did not attend even though the foundation had offered to pay for a live video feed if they were unable to travel to Rome.

Symposium organizers wanted to convince curators of the Yad Vashem Holocaust Memorial in Jerusalem that a picture display of Pope Pius at the memorial is historically inaccurate and should be changed. The captions accompanying the pope’s picture state he did nothing to condemn the Nazis and their slaughter of the Jews.

David Nekrutman, executive director of the Israeli-based Center for Jewish-Christian Understanding and Cooperation, told CNS the exhibit at Yad Vashem should be taken down “until it’s done correctly.”

The display makes the pope look like he was a Nazi collaborator “and that image affected me when I went to Yad Vashem in 1993; I automatically wrote off the Catholic Church from that image.”

He said he came to the symposium not knowing much about Pope Pius “but whatever I knew it was definitely bad.”

“The conference did enlighten me, that he did help, but what I am now trying to discover is to what extent,” said Mr. Nekrutman. Perhaps people “place too much importance on the pope’s position, figuring that if he had done something it would have saved who knows how many lives, I don’t know. It’s a learning process,” he added.