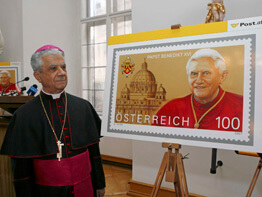 VATICAN CITY – When Pope John Paul II turned 80 in 2000, it fueled yet another round of speculation about whether the ailing pontiff might break with tradition and resign.

In contrast, Pope Benedict XVI’s 80th birthday April 16 finds him with the wind in his sails.

The pope’s new book on Jesus was being released in several languages, an event that will no doubt launch the Christological themes of his pontificate into wider circulation.

In March the pope published a major document on the Eucharist, and sources said he was preparing to release a long-awaited decree liberalizing use of the Tridentine Mass.

Following a recent Vatican summit, the pope’s announced letter to Chinese Catholics was anticipated eagerly in April, in hopes that it could offer a new path of dialogue with the government and help heal internal church divisions.

Meanwhile, the pope was preparing for his first papal trip to the Western Hemisphere, a mid-May journey to Brazil for a crucial planning session among Latin American bishops.

Pope Benedict, who marks the second anniversary of his election April 19, seems fit and energetic in public appearances. He glides through crowds and lingers with well-wishers and often delivers his most incisive remarks off the cuff.

Although the pope sometimes suggests he may have little time in office, he shows no sign of ill health or failing stamina. During Holy Week, he seemed unfazed by the heavy schedule of 10 major liturgies and encounters.

The pope is one of very few top church officials not obligated to hand in his resignation on or before the age of 80. For cardinal and bishop members of Vatican congregations, 80 is the mandatory retirement age. Bishops must offer to resign as heads of dioceses when they turn 75, and so must the heads of offices of the Roman Curia.

That leaves Pope Benedict as the oldest among chief Vatican officials, but the others are not far behind. Today’s Vatican is a senior-citizen crowd: Of the heads of the 25 main Vatican agencies, only one is under the normal U.S. retirement age of 65.

The average age of top curial officials today is almost 73. That’s more than 10 years older than the average age under Pope John Paul at the two-year mark of his pontificate.

In part, that’s because 80 percent of curial leaders are holdovers from the era of Pope John Paul. That could change significantly over the next 12 months, when 10 of the 25 current department heads will be of mandatory retirement age.

To a great extent, then, Pope Benedict has a chance to put his own mark on the Curia in the coming year. The changes could affect Vatican agencies dealing with liturgy and sacraments, ecumenism, sainthood causes, health care, justice and peace, interreligious dialogue, Eastern churches and Vatican finances.

The fact that the pope has not already put his own team in place and has introduced few major changes at the Vatican has disappointed some of his strongest supporters in Rome.

“His problem is that he doesn’t want to offend anyone,” one Vatican official remarked recently.

Some journalists, too, have been frustrated that the “Ratzinger revolution” they predicted has failed to materialize, at least in the dramatic form they had foreseen.

Joaquin Navarro-Valls, the former Vatican spokesman under Popes John Paul and Benedict, tackled the issue in a commentary written for the Rome newspaper La Repubblica.

The pope is certainly cautious, Mr. Navarro-Valls said, but that should not be confused with indecision or timidity. He said the pope is acutely aware that he’s called to make serious judgments with lasting consequences for the church and that often need “the right timing and the right maturation period.”

Mr. Navarro-Valls said the pope’s style seems to embody an intellectual seriousness: the spirit of St. Thomas Aquinas’ “diligent and subtle inquiry,” which is never in a hurry.

The pope’s patience also has been evident in his teaching style during his first two years. His back-to-basics approach has aimed at gently prodding people to question the values of today’s dominant culture and to make space in their lives for the divine.

In his one encyclical and in many talks, he has concentrated on the simple and positive core of the Christian message: love of God and love of neighbor.

When he has the world’s stage, the pope tends to set aside intellectual sophistication and doctrinal complexity. At the recent Way of the Cross procession on Good Friday, he summarized in seven easy sentences the relationship between Christ’s passion and the suffering of today’s world.
“This is the profound intention of the prayer of the Way of the Cross: to open our hearts and to help us see with the heart,” he said.

“Our God is not a distant God, untouchable in his blessedness: Our God has a heart,” he said.

At 80, the pope is not wielding a flame thrower. He’s blowing on the coals.