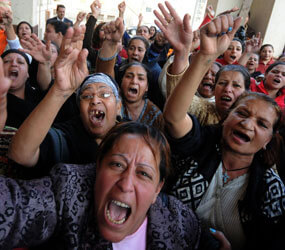 At a Mass Jan. 1 marking the World Day of Peace and a blessing the next day, the pope voiced his concern about fresh episodes of violence and discrimination against Christian minorities in the Middle East.

In particular, the pope condemned an attack Jan. 1 against Orthodox Christians in Egypt, calling it a “despicable gesture of death.” A bomb that exploded as parishioners were leaving a church in Alexandria, Egypt, left 25 people dead and dozens more injured.

The pope said the attack was part of a “strategy of violence that targets Christians,” and which has negative repercussions on the entire population. He offered prayers for the victims and their families.

The pope also denounced the recent practice of “planting bombs close to the homes of Christians in Iraq to force them to leave.” At least seven Christian homes in Baghdad were targeted in bombings Dec. 30, leaving at least 13 people wounded.

The pope said the latest attacks in Egypt and Iraq “offend God and all humanity.”

Addressing pilgrims at his noon blessing Jan. 1, the pope said he planned to invite religious leaders from the world’s major faiths to gather in Assisi, the birthplace of St. Francis, in order to “solemnly renew the commitment by believers of every religion to live their religious faith as a service to the cause of peace.”

The pope said the gathering, planned for October, is meant to recall “the historic gesture” made by the late Pope John Paul II when he convoked the first World Day of Prayer for Peace in Assisi in 1986.

In his homily during the morning Mass in St. Peter’s Basilica Jan. 1, the pope spoke about the theme he chose for World Peace Day 2011: “Religious Freedom, the Path to Peace.”

He said religious freedom was challenged today by two extremes at work in the world: secularism that banishes religion to the private sphere and fundamentalism that seeks to forcefully impose religion on everyone.

Pope Benedict called on political leaders and all people of goodwill to not give up when faced with “the negative force of egoism and violence” and to not become jaded into thinking that conflict, which puts lives and the future at risk, is inevitable.

War, he said, reflects “the most horrendous and violent face of history.” He called on everyone to promote and build peace, reminding people that “words aren’t enough for this difficult task.”

He said “a concrete and constant commitment is needed by heads of nations, but above all what’s needed is that every person be inspired by an authentic spirit of peace,” which is fostered by prayer and lived out in one’s day-to-day activities.

Peace does not come because of “weapons, nor economic, political, cultural and media power,” he said. Peace is both a gift from God and the result of a change in the human conscience, which becomes open to truth and love, he said.

The pope presided over an evening prayer service with eucharistic adoration and the singing of a special hymn of thanksgiving to God Dec. 31 in St. Peter’s Basilica.

After the prayer service, the pope went by popemobile into St. Peter’s Square, where he visited the Vatican’s Nativity scene. While choristers sang, the pope entered the grotto housing the larger-than-life-size figures of the Holy Family and knelt in prayer.