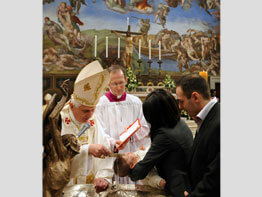 VATICAN CITY – In an annual liturgy, Pope Benedict XVI baptized 13 infants and emphasized the duty of parents and godparents to educate them in the faith.

The pope strongly defended the practice of infant baptism, saying it acts as a “bridge” between human beings and God, and helps lead children along the path of grace.

The Mass Jan. 11 marked the feast of the Baptism of the Lord. The pontiff celebrated the liturgy in the Sistine Chapel, where the crying of babies reverberated off the frescoed walls and ceiling.

The pope poured water from a shell-shaped dipper onto the head of each of the 13 infants – nine boys and four girls, the children of Vatican employees.

In his sermon, the pope said parents should consider children not as their personal property to be shaped according to their own ideas and desires, but as free children of God who need to be educated in order to make the right choices in life.

Infant baptism, he told parents, does no violence to children, but rather introduces them into “a new family, greater and more stable, and more open and numerous than your own.”

“Baptism is in a sense the bridge that God has built between himself and us, the road by which he makes himself accessible to us,” he said.

“It is the divine rainbow over our lives, the promise of God’s great ‘yes,’ the door of hope and, at the same time, the sign that shows us the path to walk,” he said.

As in the same liturgy the previous year, Pope Benedict celebrated Mass at the chapel’s original fixed altar that stands against the wall covered by Michelangelo’s fresco of “The Last Judgment.” That meant that during parts of the Mass the pope was turned away from the people.

Later, at his noon talk to pilgrims in St. Peter’s Square, the pope spoke about baptism as a moment of joy and a great gift.

“If we fully realized this, our lives would be a continual grace,” he said.

At the same time, he said, baptism implies a serious responsibility for parents and for godparents, who must educate their children according to the Gospel.