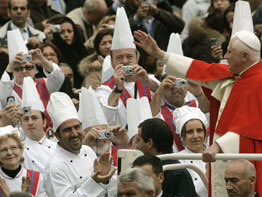 VATICAN CITY – To know God and to know how to live their lives, Christians must read the Bible, Pope Benedict XVI said.

“Drawing close to the biblical texts, especially the New Testament, is essential for believers because ‘ignorance of the Scriptures is ignorance of Christ,’“ the pope said, quoting St. Jerome.

At his Nov. 14 weekly general audience, the pope continued a talk begun the week before about the importance of the teaching of St. Jerome, the fourth-century doctor of the church.

Reading the Bible teaches believers the way they are to live their lives, the pope said, but the Scriptures must be read in a spirit of prayer and must be understood the way the church understands them.

“For Jerome, a fundamental criterion for the interpretation of Scriptures was harmony with the magisterium of the church,” he said.

Pope Benedict said the books of the Bible “were written by the people of God, under the inspiration of the Holy Spirit,” so “only in harmony with the faith of this people can we understand the sacred Scripture.”

The pope said St. Jerome also emphasized the importance of “a healthy, integrated education” in religion, morality and culture for all Christians, including women, which was unusual in ancient times.

St. Jerome, he said, recognized the “right of women to have a complete human, scholastic, religious and professional formation.”

Education, the pope said, especially regarding one’s “responsibilities before God and other human beings, is the real prerequisite for true progress, peace, reconciliation and the exclusion of all violence.”

“The sacred Scriptures offer us guidance for education and, therefore, for true humanism,” the pope said.

Immediately after the audience, Pope Benedict went up to his private chapel in the Apostolic Palace to venerate the relics of St. Therese of Lisieux, the 19th-century Carmelite saint. Pope John Paul II proclaimed her a doctor of the church in 1997.

The relics were brought to Rome by the bishop of Bayeux, France, to mark the 120th anniversary of St. Therese’s trip to Rome at the age of 15 to ask Pope Leo XIII for permission to enter the Carmelite order. Pope Leo told her the local Carmelite superior would have to decide if she could enter despite her young age. She was admitted to the convent in 1888.

Pope Benedict told the estimated 13,000 people at his audience, “St. Therese wanted to learn the biblical languages to better read the Scriptures. Imitating her and the example of St. Jerome, take time to read the Bible regularly.”

The Vatican text of the pope’s remarks in English is available online at: http://www.vatican.va/holy_father/benedict_xvi/audiences/2007/documents/hf_ben-xvi_aud_20071114_en.html.