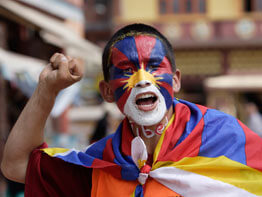 VATICAN CITY – Pope Benedict XVI asked that dialogue and tolerance replace the tensions and violence that recently erupted in Tibet.

“With violence, problems are not solved, only aggravated,” the pope said in a March 19 appeal at the end of his weekly general audience.

Pope Benedict asked that God would grant courage “to each and every one to choose the path of dialogue and tolerance.”

He said he was following “the news coming from Tibet these days with great trepidation” and felt “sadness and grief in the face of the suffering of so many people.”

With such events taking place at the time of Holy Week, it “helps us be particularly sensitive to their situation,” he said.

What began March 10 in Tibet as relatively peaceful protests to mark the 1959 uprising against Chinese rule turned to rioting and a crackdown by Chinese troops.

Chinese authorities said the final death toll was 13 people, while Tibetan exile groups put the figure at more than 80. The media is controlled tightly in Tibet, and foreign journalists have not been allowed into Lhasa, the city where most of the rioting occurred.

A Vatican official said March 17 the pope did not make an appeal earlier because of conflicting information.

However, the Hong Kong Diocese’s Justice and Peace Commission issued a statement March 18 urging China to stop its suppression of demonstrators and media in Tibet. The commission objected to the Chinese government’s use of force to quell demonstrations and its unwillingness to allow Hong Kong reporters to cover the unrest.

China claims sovereignty over Tibet while many Tibetans, including those loyal to the exiled spiritual leader, the Dalai Lama, want a return to autonomy for the region.

The Dalai Lama – who won the 1989 Nobel Peace Prize for his commitment to nonviolent protest – called the crackdown “cultural genocide” and urged his followers not to resort to hatred and aggression.

The British news agency Reuters reported March 18 that Reporters Without Borders urged officials to boycott the opening ceremony of the Aug. 8-24 Olympic Games in China. France has said it is willing to consider the idea and discuss it with other European countries.

A March 14 statement by the U.S. Commission on International Religious Freedom, an independent federal body, said: “Religious freedom restrictions and abuses in Tibet have long been some of the worst in China. The quick show of force used over the last week is part of the Chinese government’s wider policy to discredit the Dalai Lama by accusing him of trying to disrupt the 2008 Olympic Games” in China.

The commission urged the United States to take steps to ensure the Chinese government does not increase its repression of rights before the Olympics. The commission called for the U.S. to designate funding to human rights groups to monitor conditions during the Olympics and to instruct U.S. citizens participating in the Olympics about China’s commitment to international human rights.

However, in its annual report on countries’ human rights practices, released March 11, the U.S. Department of State dropped China from its list of countries with the worst human rights violations.