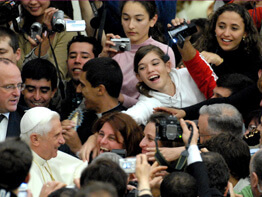 VATICAN CITY – Pope Benedict XVI asked the government of Turkey to grant full legal recognition to the Catholic Church and to establish a formal dialogue with the nation’s Catholic bishops to work out concrete problems.

Welcoming Muammer Dogan Akdur as Turkey’s new ambassador to the Vatican Jan. 19, the pope said that while Turkish Catholics enjoy religious freedom in the country the church as a whole would like to have a recognized juridical status under Turkish law.

“I have no doubt that your government will do everything in its power to advance in this direction,” the pope told the new ambassador.

The lack of legal status sometimes has made it difficult for the Catholic Church and other Christian communities to own and buy property officially and to build or operate churches, schools and hospitals.

The pope said the trip gave him an opportunity to demonstrate “the respect of the Catholic Church for Islam and the esteem of the pope and the faithful for Muslim believers.”

“In the modern world, where tensions seem to be exacerbated, the conviction of the Holy See, which you also have expressed, is that believers of different religions must endeavor to work together for peace,” the pope said.

The first and necessary step, Pope Benedict said, is for all believers to “denounce violence, which too often in the past has been used under the pretext of religious motivations.”

Catholics and Muslims must get to know each other better and increase their respect for each other “to build a more fraternal society,” he said.

“The religions also can unite their efforts to act on behalf of respect for the human person, created in the image of the Almighty, and to promote the recognition of the fundamental values which should govern the path of persons and societies,” he said.

Interreligious dialogue, the pope said, begins with people’s everyday lives and their demonstration of respect and esteem for each other and for each other’s faith.

Pope Benedict asked Catholics in Turkey to “continue to witness humbly and faithfully to the love of God through dialogue with all, particularly with Muslim believers, and through involvement in serving the common good.”

The pope also encouraged Turkey to continue to play its role as a bridge between Europe and the East and, especially, to promote peace in the Middle East.

The ambassador assured the pope of Turkey’s commitment to regional peace and security and its particular concern for the ongoing violence and political instability in Iraq.

“Iraq is a multiconfessional and multiethnic country that still can constitute a factor of equilibrium in the Middle East,” he said.

The ambassador said that ensuring greater peace and stability in the Middle East would weaken “the extremist movements that count on the degradation of the current situation.”

He also thanked the pope for his visit to Turkey, calling it a “historic step” not only in relations between the Vatican and Turkey, but also in Catholic-Muslim relations, because it gave “the whole world an exemplary image of mutual understanding and spiritual convergence.”