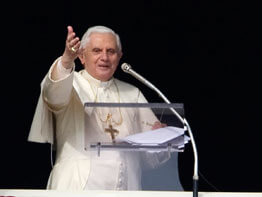 VATICAN CITY – Pope Benedict XVI appealed for “a rapid solution” to the violence unfolding in Kenya, an end to extortion and kidnappings in Colombia, and the seemingly endless “wickedness” carried out in Iraq.

During his weekly Angelus address Feb. 3, the pope urged the thousands of pilgrims gathered in St. Peter’s Square to join him in praying for “reconciliation, justice and peace” in Kenya.

He said he hoped talks under way would “be successful and lead – thanks to the good will and cooperation of everyone – to a rapid solution of the conflict that has already caused too many victims.”

More than 800 people have died and more than 250,000 have been forced from their homes since a Dec. 27 presidential election that international observers claimed was rigged.

Pope Benedict also expressed his concern for the people of Iraq, who have been so “harshly tested.”

After hearing “the very sad news” of recent events in the country, the pope said “wickedness, with its painful burden, seems to know no limits in Iraq.”

Nearly 100 people were killed and up to 200 wounded Feb. 1 when two mentally disabled women reportedly were used as suicide bombers at two crowded outdoor markets.

The pope called for prayers and God’s peace for the Iraqi people.

He then asked for prayers for Colombia, where for years people have suffered “extortion, kidnapping and the violent loss of their loved ones.”

This “inhumane suffering” must come to an end, he said, and be replaced by “reconciliation, mutual respect and sincere harmony.” He said brotherhood and solidarity “are the solid foundation for achieving just progress and building a stable peace.”

Before praying the noonday Angelus, the pope shared with the faithful gathered in the square a handful of his own prayer intentions.

He asked people to join him in prayers for all those Christ calls to consecrated life, which is “an immeasurable richness for the church and the world.”

Recalling that the church celebrated World Day for Consecrated Life Feb. 2, the same day as the feast of the Presentation of the Lord, the pope thanked all the men and women who dedicate themselves to God and the church with their vows of poverty, chastity and obedience.

Another intention the pope offered was respect for human life at all its stages.

He prayed that “everyone according to his or her own possibilities, profession and abilities always feel motivated to love and serve life from its beginning to its natural end.”

Noting that Feb. 3 marked Day for Life celebrations in Italy, the pope said all people must dedicate themselves to “welcoming human life as a gift to respect, safeguard and promote, even more so when this (life) is fragile and in need of attention and care, both before birth and in its final stages” toward death.

He praised and encouraged those who devote themselves to caring for the elderly and disabled as well as for those struggling with the “many and diverse forms of poverty.”