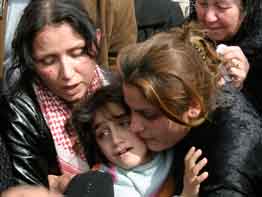 VATICAN CITY – Pope Benedict XVI appealed for peace and security in Iraq after kidnappers abducted Chaldean Catholic Archbishop Paulos Faraj Rahho of Mosul, Iraq, and killed the three people who were traveling with him.

“May those who hold in their hands the fate of the Iraqi people increase their efforts so that through the commitment and wisdom of everyone, (Iraqis) may regain peace and security and not be denied the future that is rightfully theirs,” the pope said to people gathered for his noonday Angelus prayer in St. Peter’s Square March 2.

The Mosul archbishop had just left the Church of the Holy Spirit in Mosul and was in his car with his driver and two bodyguards when the kidnappers attacked.

“The bishop is in the hands of terrorists,” Bishop Qas told AsiaNews Feb 29.

“But we don’t know what physical condition (the archbishop is in); the three men who were with him in the car, including his driver, were killed,” he explained.

“It’s a terrible time for our church; pray for us,” he said.

The kidnappers reportedly have communicated their demands, which were not made public.

But he said numerous Muslim leaders have made appeals and are working for the archbishop’s release.

“The people in Mosul live in fear,” he said.

Archbishop Sako said the archbishop was abducted by “a criminal group, it is not a group that claims an ideology,” which suggests the kidnappers may only be looking to receive ransom money for the prelate’s return.

Archbishop Sako said the pope’s appeal resonates throughout all of Iraq “because when he speaks it is balanced,” which is noticed and appreciated by Muslims leaders there.

After praying the Angelus, the pope said it was with “deep sadness I follow the dramatic news” of the archbishop’s abduction.

He said he was adding his voice to the appeal of the Chaldean patriarch, Cardinal Emmanuel-Karim Delly of Baghdad, to quickly release the 65-year-old archbishop who is in a “precarious condition of health” and reportedly must take medications daily.

The pope said his prayers were with the “three young men who were with him at the moment of the kidnapping and were killed.”

He said his thoughts and prayers were also with “the entire church in Iraq and in particular the Chaldean church, struck a harsh blow once more.” Pope Benedict also encouraged “the priests and faithful to be strong and firm in hope.”

A Vatican statement released Feb. 29 said the archbishop’s abduction and the killing of his aides was a “despicable act.”

“The Holy Father asks the universal church to join in his fervent prayer that reason and humanity will prevail in the perpetrators of the attack,” it said.

The Vatican said the fact that the archbishop was abducted immediately after leading a Way of the Cross service indicated that the attack was premeditated.

The incident comes less than a year after a Chaldean Catholic priest and three subdeacons were gunned down outside the same Mosul church.

Father Ganni, the three subdeacons, and the wife of one of the subdeacons were driving away from the church when their car was blocked by a group of armed militants, according to AsiaNews.

The armed men forced the woman out of the car. Once she was away from the vehicle the armed men opened fire on Father Ganni and the three subdeacons. Subdeacon is an ordination rank lower than deacon in most Eastern Catholic churches.

The militants then placed explosives around the car to prevent anyone from retrieving the four bodies. Later that night, authorities finally managed to defuse the explosives and retrieve the bodies.

Contributing to this story was John Thavis in Rome.